I eat the broccoli AND fly the gyros. Like drinking, swearing and also going to church -- it covers all your bases.

Just don't rely on homebuilt-kit manufacturers having done their design homework, as they have for certified aircraft. Recall that the chief widowmakers in the "bunt-o-matic" gyro category were relatively high-volume, factory-produced, nicely-finished kit gyros.

Better get back to the topic...
M

De we agree then that there is a forward vector of lift? You mentioned it in relation to a rotor can you also see the same relationship for a fixed wing aircraft?
D

Well, the question is "forward of what?"

The lift (and also the resultant when you combine lift and drag) can't be forward of a line perpendicular to the wing's FLIGHT path. If the resultant were forward, the wing would accelerate itself along the flight path. You wouldn't need gravity or an engine to propel it.

The lift (or lift + drag resultant) can be forward of VERTICAL (= the direction of gravity). That can happen when the wing is gliding downward. The resultant is still points aft of a line perpendicular to the flight path.

Again, the inboard portion of a gyro rotor blade is like a gliding airplane wing. The lift + drag resultant points forward of the axis of rotation, but aft of the blade's individual flight path.

This stuff is hard to talk about with only words; easier with pictures. I will try to find or scribble some if I get a break.
M

Here is an additional reference from the pilots reference guide

Here the diagrams for lift clearly show the vectors for various AOA.
M

Here is a vector diagram which came from www.engr.umd.edu/~jeffl/autogyros.html.

The Pilot's Reference Guide is rigorous and has it right. The resultant (red line) points straight up (not forward) relative to gravity. See the upper right drawing. In the same drawing, the initial (before getting bent by the wing) relative wind is coming at the wing from below (the wing is in a mush). That is, the flight path is somewhat downhill. The resultant points well aft compared to the (downward) flight path.

OTOH, Moment's book plays around a bit with the standard definitions. That doesn't matter until you try to communicate using his novel terminology. What he calls "apparent AOA" is simply AOA in standard parlance. Lift is roughly proportional to this "apparent AOA."

The dotted line in Moment's picture is labelled "vertical reference," which is fine. That's the line that I've referred to as the direction of gravity. He goes "non-standard" when he comes up with a lift + drag vector that's perpendicular to the wing. That would imply that the wing can be propelled through the air, and even make lift, with zero thrust. We wish! In reality, once you add in induced drag, the total of lift and drag (what I've been calling the "resultant") leans aft of a perpendicular to the plane of the wing.

Here are some simplistic examples showing lift vectors rearward and forward. from http://www.av8n.com/how/htm/4forces.html 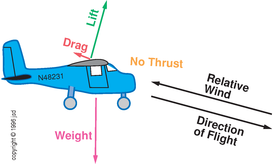 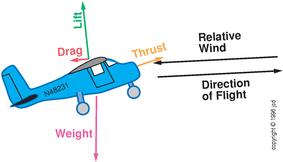 If the wing is not powered and is not decelerating there must be a force that causes balance. this force is the forward vector of lift that is acting perpendicular to the total relative wind. In total relative wind I include flow caused by any forces or wing movement.
M

Ok, now lets go back to my statement that caused all the fun in the first place. If airspeed changes AOA changes.

Even in a wind tunnel with the wing held in position and the wind in a constant direction except when acted upon by the wing. The AOA changes with airspeed change due to the induced airflow.

I can imagine also how equal AOA could be realized in two vastly different air speeds and relative winds.
D

Well, this is one of those discussions that resemble Alice's conversation with Humpty Dumpty. Humpty tells her that he can make words mean just what he wants them to mean. Of course, he's right. The humor is that defining words differently than the other guy makes communication impossible.

AOA is conventionally defined with reference purely to the direction of travel of the wing through the air. Another way of saying the same thing is that it's measured with reference to the oncoming air, far enough upstream so that the stream hasn't yet begun to be deflected by the wing. This is the type of AOA that is directly proportional to lift at a given airspeed.

If you want to use a different definition of AOA (or relative wind), so that you measure the direction of the air AFTER it's come under the influence of the wing, that's OK. The specs conventionally used to describe wing sections (lift coefficient curves and stuff) won't work with this definition, but it may not matter much in the cockpit.

The important fact from the pilot's viewpoint is that an aircraft is usually not perfectly-enough designed so that you can easily alter ONLY its airspeed. Offset thrust, draggy bits, imperfect trim or (in a rotorcraft) rotor blowback are all apt to cause some change in the lifting surface's AOA.

This change of AOA CAN be in either direction, depending on the wholesomeness of the design. A safe design at least doesn't DECREASE its AOA as a result of an increase in power setting or airspeed. Even if AOA doesn't increase with increased airspeed, but just stays constant, the aircraft will climb in reaction to an increase in airspeed.

If the aircraft dives in reaction to increased airspeed, it is statically unstable and quite dangerous.
M

I am glad that language is always changing. If it were not then we would have an even harder time communicating. I am not trying to create new science only to explain what has already been discovered accepted and published.

My vocabulary may be inadequate for the task and I have no problem changing terms to conform to established definitions. If you have better terms for these concepts feel free to enlighten me.

I would agree that an aircraft that reacts so that a further divergence in airspeed caused by a power change would be unstable, I have never said otherwise.
M

Here is an additional source I have read that talks about induced air flow and the change that it causes to AOA. Aerodynamics
R

WaspAir said:
Personally, I won't be caught above 0 kts IAS and/or 0 ft AGL without the "full, free, and correct" motion of all controls
Click to expand...

Wow, I am glad you said that, I was sitting here reading and getting sweaty palms with that fixed stick stuff. Damn, that's too risky for me. I don't care if it is "supposed" to disable instantly, if I can't wave that stick around then the wheels are not getting off the ground.

DaveAndPete said:
...I don't care if it is "supposed" to disable instantly, if I can't wave that stick around then the wheels are not getting off the ground...
Click to expand...