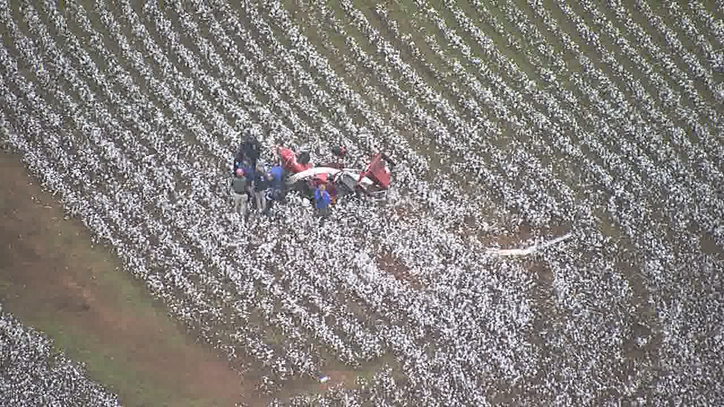 The pilot of a small plane is dead after a crash landing in a Polk County field.

Oh this is horrible news. Thank you for posting this though. I do hope a cause is determined soon.

My good friend. Our good friend. Not sure if his name has been released, so that's all I am going to say about this for now. I am in shock, just got the news from another close friend.
S 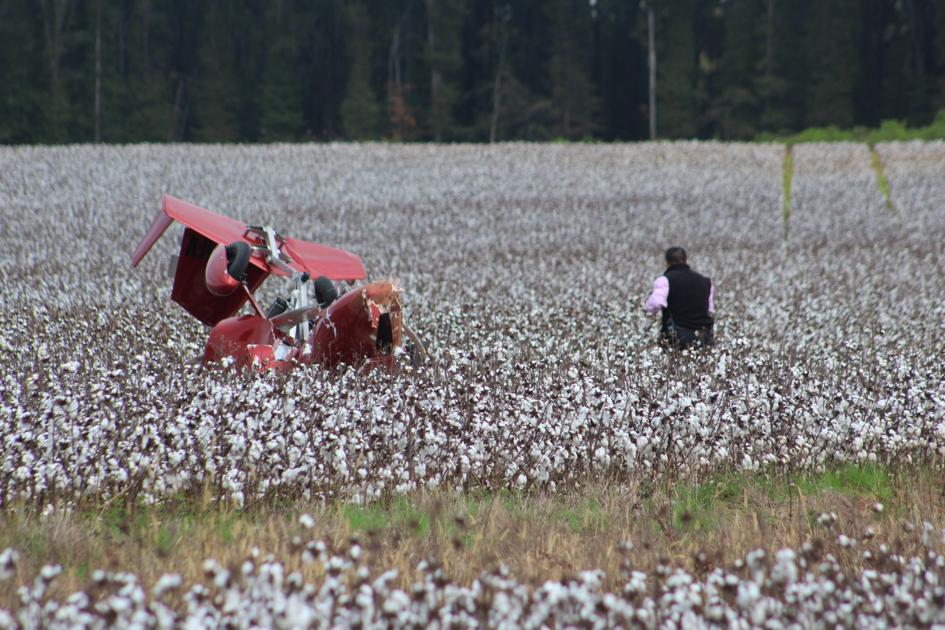 CEDARTOWN – One person was killed Monday when an experimental aircraft crashed in a cotton field in the 2600 block of Collard Valley Road.

Is this a different event, or was this a media error?

Polk County KA4A is the home of Peachstate Rotorcraft Club, and this is one of our members.

CEDARTOWN – One person was killed Monday when an experimental aircraft crashed in a cotton field in the 2600 block of Collard Valley Road.

Is this a different event, or was this a media error?
Click to expand...

It appears to me to be the same accident with the same aircraft.
I don't know why John Eaves is listed as the deceased pilot.
S

Vance said:
It appears to me to be the same accident with the same aircraft.
I don't know why John Eaves is listed as the deceased pilot.
Click to expand...

How could that happen? Looks like it dropped from the sky. Very sad.
J

The article said “Test Flight” is that a true statement ? Does anyone know what was being tested ?
P

j4flyer said:
Does anyone know what was being tested ?
Click to expand...

The registration was just done in September, which normally happens before the build is completed and the airworthiness inspection done. The machine was likely still in its 40-hour phase 1 test period. Literally everything about the aircraft was still in test.

The NTSB determined years ago this is a very dangerous time, statistically, for experimental aircraft. After phase 1 is complete, the safety of experimentals isn't that far off standard category aircraft or LSA in comparable weight classes. I'd guess Alex had just finished assisting a customer in his build.

The article said “Test Flight” is that a true statement ? Does anyone know what was being tested ?

Lets hold off on speculation.

Indications at this early time are that the error in initial pilot reported is due to someone jumping the gun and connecting the N numbers to the owner, then stating that he was the pilot before knowing all the facts.

It is my understanding that the "first 40" were being flown off by Alex for his customer in and around A4A. I do not know anything about any adjustments being needed or being made, more information may be available later.

The accident is under NTSB investigation and all parties involved are under NDA at this time.

Preliminary examination of the photos indicate that the gyro went in hard and fast. In every case where the pilot is conscious and has control of pitch and yaw when coming in, if there is an engine out and a decent LZ available, such as the cotton field here, then the pilot will glide to within the tops of ground cover, flare to a zero ground speed, stop and drop, so as not to upset the craft upon touch down. No big deal, engine out or not. I've done it at least half a dozen times and all I ever had to do was trailer the gyro home, at worst.

Even in a case of poor piloting the gyro should not be carrying so much ground speed that it would flip completely over the nose as appears to have happened in the photos. The extensive damage to the under body around the nose wheel, the collapsed nose gear, extensive tail boom damage, one rotor blade a fair distance away from the rest of the airframe and remaining rotor, the gyro resting not to one side but rather totally upside down, all indicates a great deal of speed carried into touchdown and a hard wheel barrow landing, not mains first as a conscious pilot with pitch and yaw control would definitely be able to do in any condition where all such control of the aircraft is still available.

In light of the NDA mentioned, it can be said that no evidence of mechanical failure is obvious at this time. An engine out or some other type of power plant failure is highly unlikely since it does not explain the obviously excessive speed carried into this emergency landing.

As a gyro pilot with first-hand experience in making terrible piloting decisions and landing a fuel-starved Air Command CLT tandem with a full body pod at 35 mph GS, hitting a berm, breaking off the nose wheel completely, and still just skidding to a roll-over stop and walking away with only a split lip and a "boxer's break" on my hand, it is my opinion based on the information provided at this point that Alex was not in control of his muscles, perhaps even unconscious, when the gyro came in.

Bear in mind this is no more than educated speculation.

I guess the one good thing here is that there was no fire, making investigation easier to complete.

If any PRC members come to see this first, please check in to our Peachstate club forum http://peachstaterotorcraft.org ASAP and respond to the thread posted there concerning our club's treasury donation for the family. Thank you, very much.

I see a lot of similarities in the wreckage damage & layout ( such as can be determined from the media pics from above) as with Jim's crash landing after he lost conciseness from the massive brain bleed ...that showed up in his autopsy! I would suspect a medical event & loss of consciousness! I certainly hope for Alex's family's peace of mind that something definitive comes out of the autopsy! I'm hoping some gyro knowledgable locals can advise & assist the FAA/NTSB reps analyzing the impact marks & manner of wreckage damage!
So very very sad!
S

I think we also have to keep in mind, potential mechanical control loss due to linkage failure, blade issue (he was working on it) build mistake etc. I personally experienced such a failure due to a build oversight, and a bolt held in within ¼" by the bolt head touching the mast is the only thing that saved my life. This accident has similarities to Chris Lord's accident - apparent loss of control by experienced pilot's is always puzzling.
J

My post on the testing was only to gather the details on a statement presented / contained within the initial report. I’ll leave the “Why” to the experts.


On November 4, 2019, about 1200 eastern standard time, an experimental amateur-built Tango2 gyroplane, N875FV, was substantially damaged when it impacted a field near Cedartown, Georgia. The sport pilot was fatally injured. Visual meteorological conditions prevailed, and no flight plan was filed for the local flight, which originated from Polk County Airport (4A4), Cedartown, Georgia, around 1130. The test flight was conducted under the provisions of Title 14 Code of Federal Regulations Part 91.

According to a friend of the pilot, the pilot was performing a test flight in order to mitigate a vibration in the gyroplane. The friend watched the pilot add fuel to the gyroplane, check the oil, and perform part of the preflight inspection before the friend continued working on other things around his hangar. Then, the friend watched the gyroplane takeoff, fly out of sight, and noted no issues with the gyroplane. He knew that the flight test would last about 15 minutes, so after 30 minutes had passed, he alerted authorities and went to look for the pilot. The wreckage was located later that day around 1330.

According to Federal Aviation Administration (FAA) airmen records, the pilot held a sport pilot certificate with endorsements for gyroplane and weight-shift control land. He did not possess an FAA medical certificate, nor was he required to have one. According to a friend of the pilot, he had about 200-300 hours of flight time in the same make and model as the accident gyroplane.

The two-seat tandem, fixed tricycle gear, composite gyroplane was assembled from a kit and issued an FAA experimental airworthiness certificate in 2019. It was powered by a Yamaha 8GL-01, 130-horsepower engine, equipped with an Aero Prop three-blade, fixed pitch, composite pusher propeller and a two-blade aluminum rotor. Review of the maintenance records revealed that the gyroplane's most recent condition inspection was completed on October 20, 2019. At that time, the airframe and engine had accumulated 0 total hours of operation. The hobbs meter was located in the wreckage and noted 4.8 hours of total time.

The 1335 recorded weather observation at Paulding Northwest Atlanta Airport (PUJ), Dallas, Georgia, which was about 14 miles to the southeast of the accident location, included wind from 120° at 8 knots, visibility 10 miles, clear skies, temperature 13° C, dew point 03° C; and an altimeter setting of 30.20 inches of mercury.

The main wreckage was located in a cotton field, at an elevation of 853 ft above mean sea level. The gyroplane impacted the field, and then came to rest inverted about 15 ft beyond the initial impact point. The debris path was oriented on about a 270° magnetic heading. All major components of the gyroplane were located in the vicinity of the main wreckage. There was no evidence of post impact fire and an odor of fuel was noted at the accident site.

The vibration tester unit that was being used by the pilot during the flight was not located. However, the cables and sensors remained attached to the airframe and rotor head. Two of the three connection points remained intact and the third connection point was separated. In addition, the excess cable was located in the aft seat.

It brings tears to my eyes just thinking about it. I lost my father that day. My hero.....
For those of you who are speculating please know this.... there were no issues with the gyro at all (mechanically)...
My father had a medical emergency in the air which was the primary contributing factor to the crash...
S

autotic said:
It brings tears to my eyes just thinking about it. I lost my father that day. My hero.....
For those of you who are speculating please know this.... there were no issues with the gyro at all (mechanically)...
My father had a medical emergency in the air which was the primary contributing factor to the crash...
Click to expand...

I think Alex was an excellent person. We all liked him. I agree that speculation serves no purpose on this forum. I also believe honesty will go a long way. If Alex was testing for vibrations on that particular craft, should it really be stated that there was nothing wrong with the craft. Let’s all be fair and honest here. Let’s all keep it civil and give honor to Alex and his contributions to the aviation world.

Supermotive said:
I think Alex was an excellent person. We all liked him. I agree that speculation serves no purpose on this forum. I also believe honesty will go a long way. If Alex was testing for vibrations on that particular craft, should it really be stated that there was nothing wrong with the craft. Let’s all be fair and honest here. Let’s all keep it civil and give honor to Alex and his contributions to the aviation world.
Click to expand...

In my opinion using a vibration tester to help smooth out the rotor is a common step in delivering any rotorcraft.

I feel a vibration test is not an indication anything is wrong with the aircraft.