Last Friday I flew my gyro down to Riverside KRVS (D towered airport) @ Jenks on the SW side of Tulsa!
Lovely 1.8 hour cross-country flight with 15kt tailwind. I was hosted by our newest gyro CFI Carl Potter and his wife Deb for the week-end. Carl runs a FW flight school out of KRVS.
Mark Airey drove up from Justin TX in his motorhome ..with his TAG in a trailer ...and I brought our TAGNA rotor balancing gear down to tune his rotor!

On Saturday morning Carl in his yellow 912 TAG and I in my 914 red TAG ...with passengers Walter & Mark A. ... flew over to Haskell (2K9) on the S side of Tulsa ...for the first donuts & coffee breakfast social for local pilots ...since Covid lockdown!
It was a superb early morning flight in clear air with a surprising headwind at 2500'MSL ...as we made contact with Haskell CTAF ... we learned of an ULaircraft pilot who had taken off from the airfield and gone down somewhere N of the airport. As there was a plume of smoke visible to people at the airport on the ground ... they requested any arriving aircraft (us) to go over to check it out ..... the smoke proved to be a brush-pile burn across the river. As we flew in to land on 17 at the airport ... the injured pilot who had made phone-contact with friend at the airport told him we flew right overhead his position ... he said he would not be visible as he was hidden under tree canopy!
Carl & Walter who knew the area, took-off again to do an aerial search ... using the pilots phone connection with a handheld radio communicating with the search gyro via his friend at the airport.... the gyro flying above was able to pinpoint the location by triangulation. Then look for roads & tracks to access the adjacent field for the ground EMS units. Next he communicated by radio to the airport groundman who had another friend phone directions to the ground-rescue assets. By flying low and getting the attention of EMS the gyro was able to indicate which roads and direction to take to reach the injured pilot!

On last nights Tulsa news ..... the following interview was aired of the gyro's role in search, locate and direct ground rescue assets to the hidden crash site. 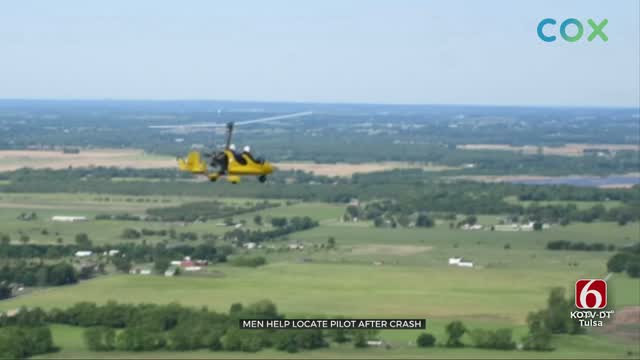 Two pilots said it was a miracle they were able to help find another pilot, who crashed in rural Wagoner County over the weekend. The pilot who crashed has some broken bones but is going to be okay.
www.newson6.com

This is the initial news link from Saturday ..... https://www.newson6.com/story/5eb6d...Fgqg4M6k3ggKQyd1bKzxg9KYn8De8Uccrzj9Y634x6owc


We are happy that the injured pilot was found and evacuated within an hour of his crash ...and the gyro's flight capability demonstrated what a good aerial asset the gyro can be in these search & locate situations!

I sent Carl some air-to air in-flight photos I had taken flying to & from Haskell ... and he sent them to the reporter ...who used a couple of my pictures in the news segment!
Last edited: May 12, 2020
I

Wonderful and what a happy ending. Its hard to imagine that plane would have been so difficult to see. This story might have had a different ending had you all not been there.

Great news Christine, gyros need all the good press they can get.
G

Good press. Ill be curious what happened with the plane, looks like it got messed up pretty bad

Folks at the airport .... reported the engine sounded "rough"( which was more like "different"!) ...as I later learned that it had been modified at our local Rotax mechanic who does a lot of Edge Rotax conversions and mods ... he was very concerned about an engine failure ... but the pilot spoke to him & said the engine was fine and reported a sudden fluttering of the elevator and rapid inversion & roll over into the trees! ...May well have been a control surface failure!
Last edited: Jun 25, 2020

What a great adventure and life!!!

Great story and outcome. Thank you for sharing! What's new with you otherwise?

Now THIS is what belongs in a RF <NEWS> thread!

There used to be a McCulloch J2 based out of Riverside airport. I was in Tulsa visiting the Spartan A&P school and saw the J 2 doing takeoffs and landings there. It was the late 80's or early 90's, but it would be fun to try to track it down.
G

Now this is gyro news. good bye to the pissing contest in "president Trump"

Haha, even I know better than to even look at that thread.
G

Yeah and I am old enough to know better too.
Y

ÿes,me too.love life
You must log in or register to reply here.

Doug is willing to do what it takes.