Birdy, Do not you think that flapping stops will be reached when, with a yaw 180 °/s, you tilt the disc to 45 degrees for out? (Remember that an inclination of 30 degrees produces only 300 lbs of forward thrust). So there is probably an area completely locked.
Last edited: Oct 15, 2010
B

Spiral lock out: Vertical descent flat with rapid rotation in yaw
Firstly, the rotor in a flat decent has next to 0 cyclic inputs or teetering angle.
The rotation, im assuming, is caused by the asymetrical thrust from the prop caused by the airflow over it.

Perhaps an explanation for spiral lockout: Centrifugal Force combat thrust motor. Forward flight impossible.
If centeifical force and thrust are in a balanced state, unbalance them and the state will change, no?
IOW, cut power and stick forward and into the yaw.

Not sure if im any help or just confuseing both of us, but im not finished yet.

If your in a Vertical descent flat** with rapid rotation in yaw and power on [ you talk bout the thrust be'n equal to centrifical force], then your more likely in a spiraling tail slide.
** the flat bit, im assuming, refers to the frame, not the rotor.

Birdy, my drawing simplistic suggests that by increasing the thrust, the autogyro moves towards the center. But this is not so. Look the accurately drawing below: From time 0, when one applies a force rotating, speed reaches a maximum after half turn, and then decreases to 0 after one full turn. More forward thrust is great, more the speed attained is high. But 300 lbs turning 90 °/s give only 15 mph.
The forward thrust can be obtained by the engine, or by tilting of the the disc. Without engine, 300 lbs is obtained by forward tilting 30° (if weight 600lbs). Since this is not enough, I mentioned 45° (airframe to 55° about) Despite this, the drawing shows that the flight is mostly lateral.
Jean Claude 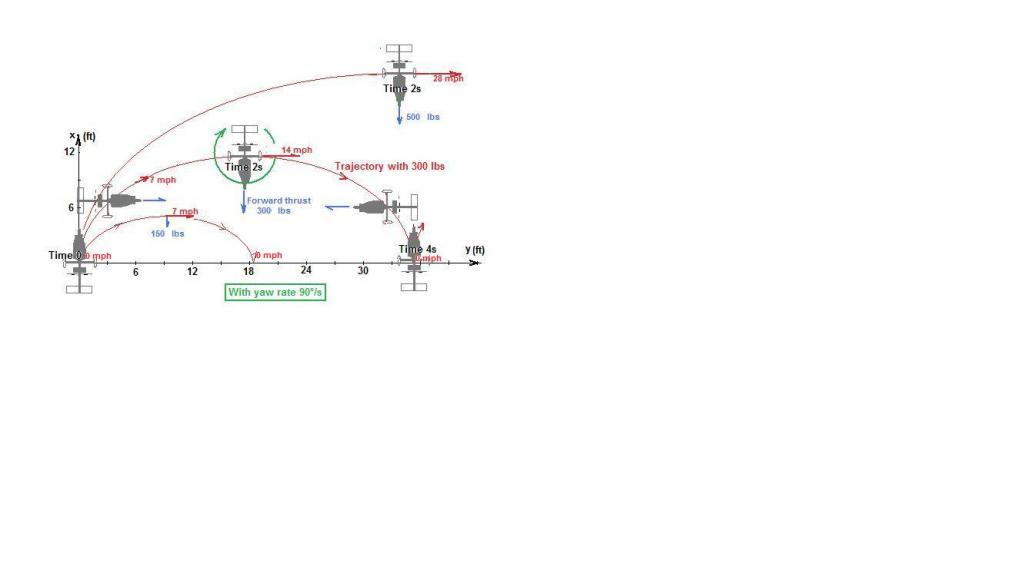 Birdy, perhaps this sketch is it better? 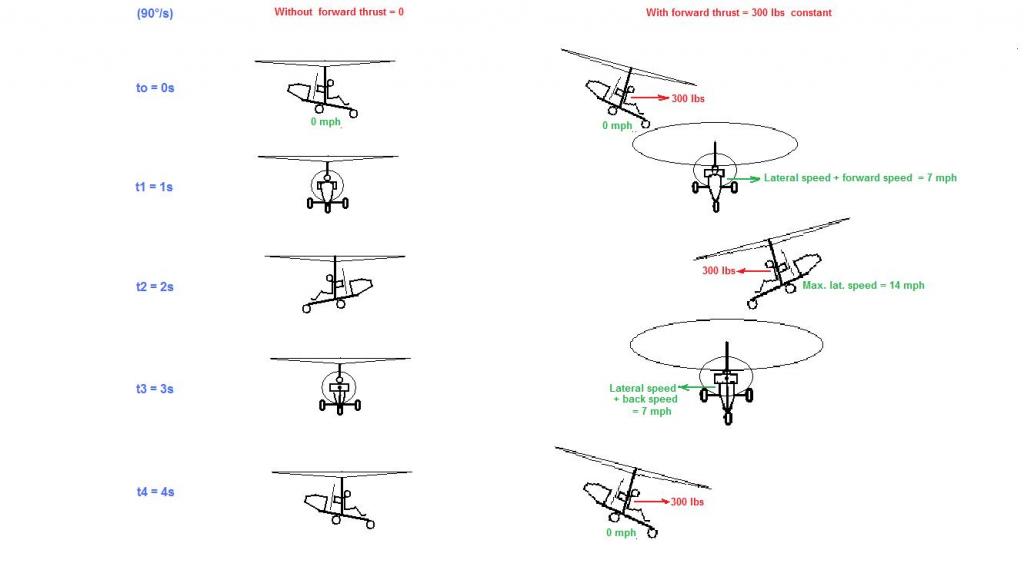 I still dont see why a little stick into yaw [ into relitive wind] wouldnt widen the spiral and youd justy fly out of it. With or without power.

You're right Birdy. For a efficient acceleration, it would tilt the disk towards a fixed point on the horizon (despite the yaw rotation of the airframe).This is perhaps not easy when the fixed point turns behind your back. But constant tilting forward or on the side relatively to the airframe is not efficient for this because the effect vanishes at every turn. 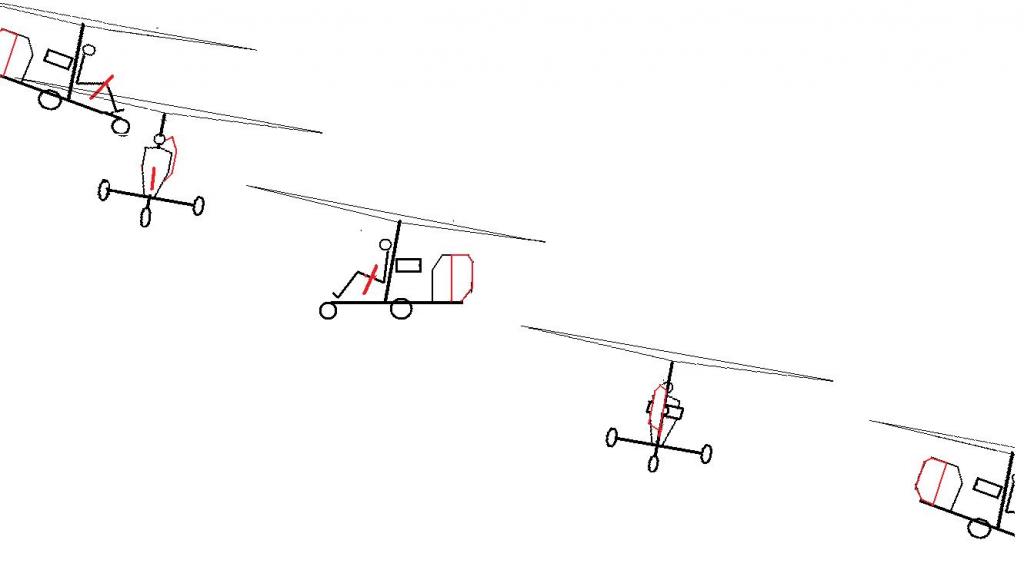 Jean, once the spiral starts to change to a spining drift, the new airflow will go along way to stopn the spin, coz it will want to wethercock into relitive wind.
The RTV also will have alot of authority as to where youll end up.
Im not sayn that youd fly streight out of it, but the spiral will slowly loose momentum, allown you to get the yaw under control.

In this sketch, youv got the pilot 'circleing' the stick. All thatd do is hold the machine in a drift.
If he just held it to the 'outside' of the spiral, he'd widen the spiral.

would tilt the disk towards a fixed point on the horizon
Never mind the horison.
Consentrate on getn control before you hit the horison.
C

Jean Claude, please don't get my question wrong, but do you actively fly gyros? And if so, have you ever gotten into such a situation as you describe?

I ask because no one I know of, including myself, has ever heard of or experienced this problem. Combined, this statement is worth many tens of thousands of hours of flight experience in gyros.

I understand your point of view, Birdy. However, the nose comes very slowly in the wind when the slip velocity is only 7-10 mph mean, while that each turn you down 100 ft lower (when yaw 90°/s)

Chris, I have no experience with this type of fly. She was reported to me by several drivers here in France (including an instructor) and I read some post on this subject in this forum. I recognize that true vertical drop is unusual. Even less with rapid yaw. But I know a pilot who has destroyed his gyro , without understanding why he could not escape. It's more clear now. Just understanding for better building.
Jean Claude
Last edited: Oct 20, 2010
B

Jean, mate, im still convinced your mates got caught in a spiraling tail slide.
The reason im convinced is coz most people, even high hour people dont know why they cant regain control, simply coz they dont know they are go'n backwards.
Further to this,it is easy to see why most people wont feed the required inputs, coz to them, they seem to be the rong ones.

Im not second gessn you Jean, but id like to hear wot happened, in their words.

FWs can 'get trapped' in spirals, coz its much harder to unstall a flyn surface.
Our rotors dont stall, so we still have full control, no matter how tight/fast the spiral is.
C

I agree with you, birdy. I am not at all convinced that this kind of difficult to recover situation actually exists in practical flight. Still, I value Jean Claude's input highly. It's better to worry about something and learn some other interesting thing in the discussion than not to worry at all.

Yes, Birdy. Rapid yaw because they are go on backwards. But to get out of there,
first reflex is not he put the stick forward, feet in the opposite direction, and throttle at the bottom? Why are they not out?
Last edited: Oct 20, 2010

Who to tell? WE have anotha Odd Couple here . . .a frenchman and an aussie . .
Heron
thanks guys

Thank crist for that.
I did actualy wunder bout that decent rate.

Why are they not out?
With little info to go on mate, i cant answer this correctly/safely.

first reflex is not he put the stick forward, feet in the opposite direction, and throttle at the bottom?
Sumone with a cool head and no grasp of reversed airflow would just keep tryn different things till he got it rite, or hit the ground. IOW, If wot your do'n dosnt help, try sumthn different.
But, for most mortls, panic sets in and reason goes out the window.

There are alot of things to consider, and no blanket ruel of thumb wen it comes to getn out of a reversed spiral, coz different power/weight machines, tandums,heavys, different tail setups..................... will have different responce rates and different degrees of 'lockness'.

But there is one situation iv been in, once, where it seemed the stick was jamed on the backstop.
In a high power/weight machine, at WOT, and min AS, very nose high, i felt it start to sink [ only 60' up] wen i lost the up draft i was sitn on.
I first, naturaly, tryed to push forward, but the stick refused to move!!!!!!!!!!!!!!!
[ its amazn how fast the mind works wen it needs to]
If i stomped either peddle i woulda nose dived, and if i cut power i woulda just sank into the deck tail first. The only option was to stick to the side, [and ill cut a long story short] which worked.
The reason why the stick appeared to not want to go forward was coz of the extra force needed. Much more than at any other time.
Wen the machine is in the situation i described, there are 4 forces holding it on the backstop.
1; the trimm spring, which is always there, but in this situation, there is buggerall rotor thrust to balance it.
2; With the machime at such a high nose attitude, the weight of the rotor is also holding the stick back, coz the vecter of gravity isnt in the same place it normaly is. [ the rotors lift is usualy taken care of its own gravitys effect, but wen the disc is so far back, gravity is nearing parallel to the disc.]
3;the drag of the rotor is also holding the stick back, coz the rotor is almost in a virtical decent type airflow, but horisontaly. [ The RTV also to a lesser extent]
4; The weight of the machine has lost its effect on the offset, also coz gravity is nearing parallel to the torque tube.
With all 4 forces workn at nearly the same direction, against your force on the stick, its little wunder it felt 'jamed'.

Why are they not out?
With little info to go on mate, i cant answer this correctly/safely.
Me neither, Birdy. I am looking for a plausible explanation.
...Wen the machine is in the situation i described...
Descent back with fast yaw ?
Im not sure I understand: you said "the stick appeared to not want to go forward " Watch my sketch: the stick wants to move ahead of itself, no?
Jean Claude 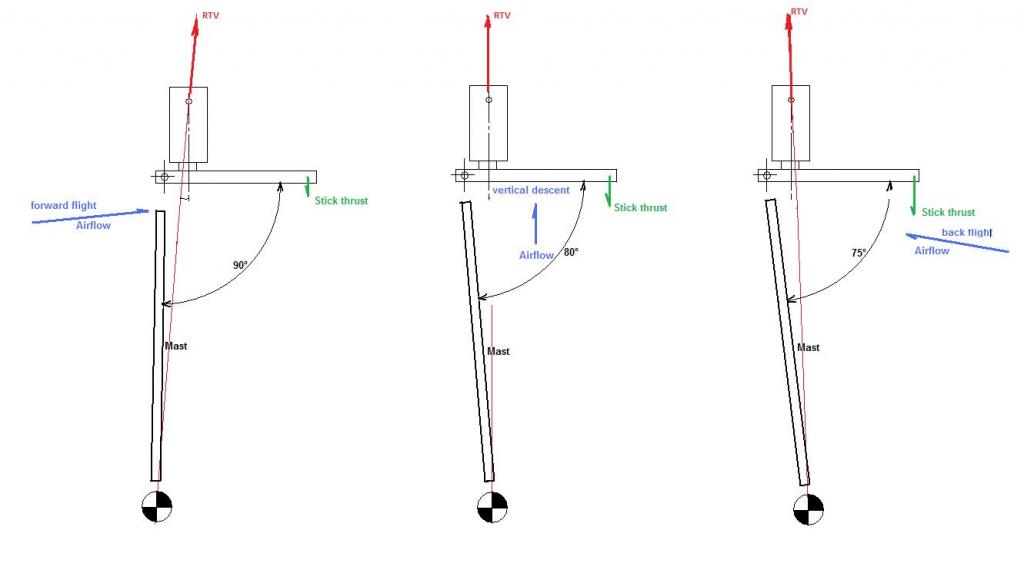 To me it looks like the CG would need to be aft and or the control moments restricted in order to get the mentioned effect. I have done the tail slide but never had the guts to go more than half a turn, scares the $#!+ out of me. I am not the master fast rearward flight but see no need. The tail slide is not fun for me so why do it.

My reaction has always been center rudder and forward stick. I believe this would be common as it takes effort to enter the condition and doing the opposite to exit would be natural. I have not tried this at idle but believe the problem would be exacerbated. I have done zero AS vertical descents w/o power and the gyro will rotate until power or AS is added.

If the problem has been reported by an instructor or pilot then there should be an accident associated with it. Can you post a link to the supposed accident or pilot that reported the event? If not then I would place it under the heading of myth or urban legend.
B

Nuthn mythical about a tail first spiral Michae.
All 'unexplained' happenings are either a myth or act of god. [ but only tell sumone figures the why]

Watch my sketch: the stick wants to move ahead of itself, no?
Correct, wen the machine is at its regular attitude.

Wen my stick 'locked' i was almost motionless.
Absloute min AS at full power and no virtical speed. IOW, just before sink.
Wen i attempted to apply forward stick, it had just started to sink.
There was almost no horisontal speed, and very little virtical speed.

I know this is not wot your mates are talkn bout. I just mentioned it coz its the only time iv ever experianced any control in put to be ineffectual.

Michael, At first I did not understand why there might be some difficulty to regain control quickly. Now, trying to quantify this, it seems very credible. Improve yaw control for a vertical descent seems important
If tilting rudder hinges, or T tail can reduce the default, why not ?

Jean Claude
You must log in or register to reply here.