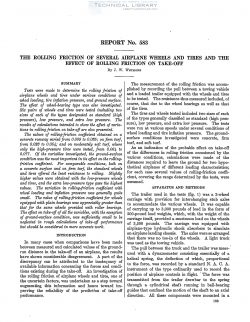 National Advisory Committee for Aeronautics, Report - The Rolling Friction of Several Airplane Wheels and Tires and the Effect of Rolling Friction on Takeoff
www.abbottaerospace.com
Comment: Interesting measurements of the variations of rolling coefficient according to the runway (concrete, firm turf, soft turf), the type of wheels (standard, low pressure, very low pressure), the differences in inflation pressure, the plain or ball bearings

Downloaded and looks quite comprehensive. Thank you for the link, Jean Claude.
M

# 4 had the least rolling resistance of course ... but then he surprised us by going to a rail yard to do the same thing on a very heavy rail car .... it was easier to move than the automobile .... steel wheels on steel rails have almost zero rolling friction .... I have never forgotten those lessons .

Thanks for posting this JC
You must log in or register to reply here.

P
Need information for use in designing a variable-pitch propeller