Noise from our Calidus 914 UL

Hey folks. We have a 2016 AutoGyro Calidus with a 914 UL motor. The engine has 490 hours, and it has started making this disturbing squealing sound between 4000 and 4500 rpms. (Listen to audio file attached below. Hopefully it works)


Today after reducing power to 3000 rpms in flight and then powering up full throttle again, the power did not come back past 4800 rpms. Manifold pressure also would not exceed 28 inches, and the terrible squealing sound was constant at all throttle settings. Maintaining altitude was also a struggle. This lasted about 5 or 6 minutes and then it sounded like the motor was trying to push itself for more power and something broke free and the power came back. The squealing noise was also gone after the power returned.

We run Aeroshell Sport +4 with 91 octane ethanol free fuel and change oil and filter every 50 hours. I've never seen any unusual metal on the magnet when changing. We try to be easy on the engine to the best we know how.

We have 3 theories of what this could be, but no one we know seems to be sure.

1. Gearbox issues that are apparently common with Rotax owners who idle too low or have heavy props. (We do have a carbon fiber 4 blade Duc Propeller with nickel edge, but i don't think its heavy. It actually made our engine run smoother. We don't idle or warm up below 2000 rpm, but we have not replaced the bushing things in the gearbox that I read about on rotax-owner.com I just found out about those and don't know anything about them really.)

2. Problem with the turbo charger. Maybe coked oil? We do try to let it cool down before shutdown. (I did find some oil inside the cowling, and a drop of oil dripping off the turbo)

3. Clutch for the pre-rotator might be engaging when it shouldn't. Perhaps it bogged the engine down today in flight?

If anyone has any ideas or has heard a noise like this before coming from an engine, I would be interested in what you think this could be.

Eric and Whitney; Welcome to the Rotary Wing Forum.
My guess would be the turbocharger floating sleave bearing.
If you remove the exhaust from the turbocharger it should be apparent.
If it is in good shape there should be little play and it should turn easily by hand.
If it has much play or does not turn easily by hand it needs a new bearing and the shaft may need to be replaced.
I have heard of people just breaking the turbine shaft loose but I don't recommend it.
There were at least two competent turbo shops in Salt Lake City that could repair it or you could buy the parts from Rotax.
I no longer have the information on the turbo shops but they should not be hard to find.

Hey thanks for the reply Vance! I hope you are doing well.

You were right about the turbocharger. The bearing did go bad and then the blades on the impeller started to come brush up on the housing. I am hoping it can be rebuilt at this point, but I don't know if it can or not. New ones run about $6800. I found a turbo shop in Alabama who is going to get back to me on Monday and let me know if they can do a rebuild. The shop I found here in Salt Lake City won't touch it because it's on an aircraft.

I'm guessing this was caused by shutting the engine down too quickly after flying and the oil got coked and plugged the drain on the turbocharger. I do remember you teaching me about this potential issue with Rotax motors last year. Hence we have always tried to allow for cooling by not shutting down too quickly. Our taxi back to the hangar is at least a minute and then we wait a little longer after arriving. We also use the engine fan on warmer days during the cool down and after powering down the motor.

Do you think we should be doing more than 2 or 3 minutes for cooling?

Also... If anyone knows of a good turbo shop that can do a good rebuild, I'd appreciate any referrals.

Good job on catching the problem before it became an in air emergency Eric.

In my experience it is best to not mention that anything you want worked on is for an aircraft.

There is usually a model number somewhere on the turbo charger housing and that is all they need to order the correct parts.

You may find that model of turbocharger available from the manufacturer for much less.

You turbocharger set up has a somewhat complex interface with the controller so you don’t want to get too creative or you will need to modify some of the controls.

Your POH should have a cool down period for your aircraft. Writing in the most general terms five minutes at idle would likely be appropriate.

You are cooling the shaft that runs through the turbocharger bearing so other than time there is no way to tell if it has cooled.

You also should have a close look at your wastage for binding; it may be a part of the problem.
Last edited: Apr 3, 2022
D

Friends with 914 idle for 5 minutes to reduce engine oil temp as low as possible to 50-65c or below 150F. There is no turbo oil temp gauge. What do other 914 owners do? I wouldn’t cool down just based on time. I don’t think 1-2 minutes would be enough, but depends on your coolant setup and OAT.

Thanks for posting so others know what to look for when they hear turbo engine making pig squeal noises. Also (obviously) best to diagnose as much as possible on the ground rather than in the air when you hear noises the impact engine performance…
Last edited: Apr 3, 2022

You might also consider how you park the machine. By that I refer to not goose the engine to go into the parking spot and then kill the engine. In this case you have increased the turbo fan speed and then killed the oil flow. Hard on the bearings.

Some thoughts on turbo cool down.

The turbine wheel on the exhaust side of the turbocharger may run around 1,200 degrees F (649C) and the heat soaks into the shaft that drives the compressor wheel.

This shaft typically goes through a plain bearing with the shaft lubricated with oil.

When the engine is at idle the oil is flowing through the bearing and cooling the shaft.

The heat from the turbine is soaking into the shaft so what I am waiting for is the turbine to cool off because I am not above idle and the oil flow is continues to cool the shaft.

If I shut it down too soon the heat from the turbine wheel continues to soak into the shaft and without the flow of oil the oil will become carbonized.

Over time this will cause the bearing to fail.

This is why the engine should be at idle for around five minutes prior to shut down so the turbine can cool and circulating oil can continue to cool the shaft.

The engineers realized that car drivers would not let their engines cool down for five minutes so they have come up with lots of ways to manage the abuse so cool down is not so important in a modern turbocharged automobile.

It appears to me the turbocharger used on the Rotax 914 is simple and employs none of these measures.

In other words it is not about oil temperature but the time it takes for the turbine wheel to cool down so there is no way on a typical aviation turbocharger to measure the process beyond time at idle. 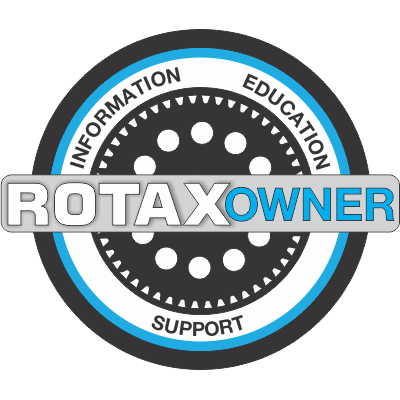 The blower on my Bell is much bigger than a Rotax application, but the manual calls for a minimum 25 C cylinder head temp drop (that's about 45 F) or 5 minutes, whichever comes first, and in practice that means I don't shut down at more than 150 C (about 300 F) while cooling at 21" MAP.

That video suggests that about two minutes at 2000rpm or less should be a sufficient cool-down.
But is there actually any indication that coking is what caused the problem here?
It seems that, if there is indeed coked oil in the system, it might manifest itself, at least initially, in less severe ways than turbo vanes actually hitting their housing.
If/when this particular turbo is taken apart, I would be very curious to see the condition of the shaft and exactly where/what the point of failure was.
Last edited: Apr 4, 2022

Thank you all for the insights and suggestions. I'm in the process of trying to remove the turbocharger. There are two bolts behind the impeller housing that are difficult to get at . I put some mouse milk on them yesterday, so hopefully they come out today. I'll post more as I get further.

A little more history here. Last July we had a fuel pump start to fail. The main pump worked, but couldn't keep up with full power settings and the engine would start to run rough. We had to run pump 2 for full power beyond 10 seconds. Around that same time, we started hearing a much quieter squeak sound at 5k-5300 rpms. It was so quiet that some thought it could be electrical. We replaced the main pump and it didn't fix the issue, so then went back and replace both pumps and inline fuel filters. Engine then runs fine, but the squeak was still there.

We consulted with several mechanics and other pilots and there were theories, but no solid answers and everyone seemed to think it was safe to fly. The squeak did gradually get better over time, and by January at our annual inspection, we couldn't hear it all when I took the mechanic for a flight to have a listen.

Also... sometime in the fall last year, the turbo stopped making full boost, so we had our experienced rotax mechanic adjust the waste gate as the cable had stretched a bit. We also regularly clean and lube the waste gate with mouse milk and this other silver lubricant recommended to us. Waste gate has been functioning normally since and always cycled just fine when turning the key on.

I'll post more photos when I get the turbo removed.
Last edited: Apr 5, 2022
You must log in or register to reply here.

How to stop ignition interference on radio

Shut down Turbo and bang!