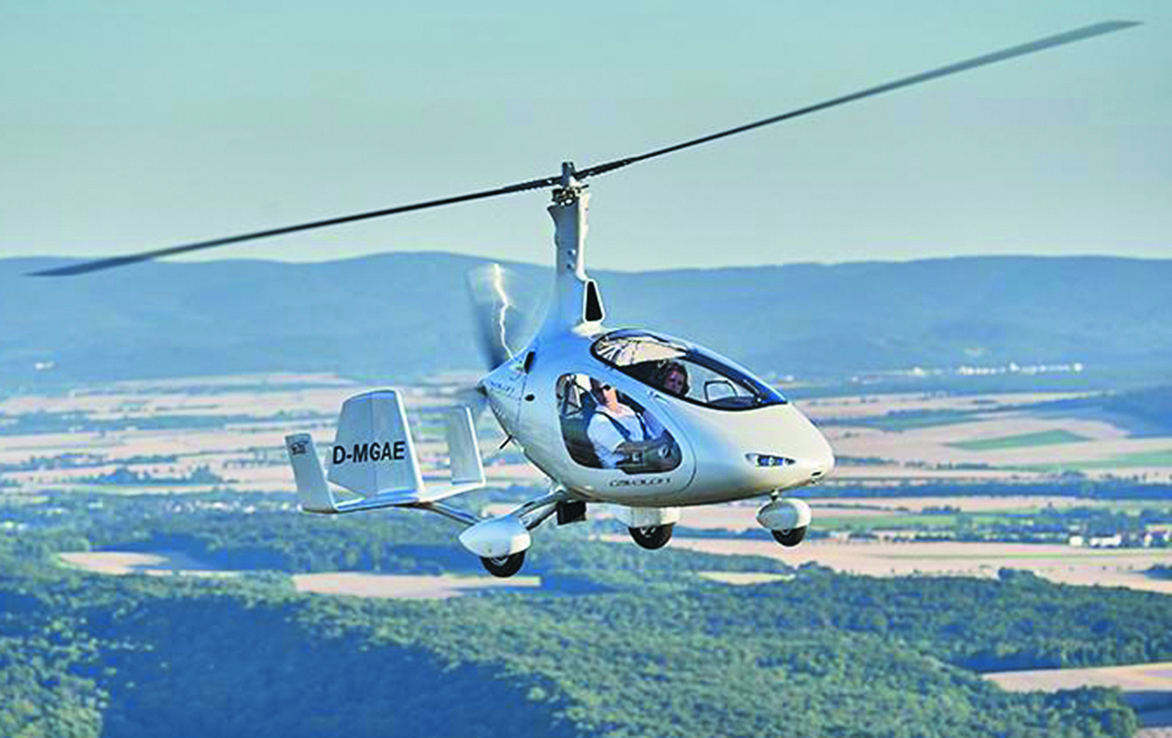 Long relegated to kit-only status in the U.S., certified gyroplanes are available and will eventually achieve SLSA status.

What do we have now? It is only an illusion that Eurotubs are amateur built kits; they are in fact factory built machines which have been unbolted for shipment and must be bolted back together by the “builder.”

Would a factory built Piper “Cub” be considered a kit if the wings, engine and landing gear had been removed and crated for shipment?

C. Beaty said:
What do we have now? It is only an illusion that Eurotubs are amateur built kits; they are in fact factory built machines which have been unbolted for shipment and must be bolted back together by the “builder.”

Would a factory built Piper “Cub” be considered a kit if the wings, engine and landing gear had been removed and crated for shipment?
Click to expand...

It is my observation there is a list of tasks to be accomplished for a gyroplane to be considered experimental amateur built that include a lot more than bolting things together.

It appears to me most people spend a week or two building most of the gyroplane kits available today.
J

The kit build 51% rule isn't about whether or not it is actually built by an individual, it is to prevent lawyers from suing aircraft manufacturers into oblivion yet again.
C

Yeah, JJ, the “amateur built” delusion probably does afford some protection to the manufacturer. Otherwise, "kits" would cost as much as certificated aircraft.
Last edited: Jul 5, 2020
D

Ah, for the good old days, when a Bensen kit gyro was in every sense amateur-built. The builder glued up his own rotorblades from strips of pine, steel strap and plywood, machined his own rotor head out of bar and block stock. and tediously cut, drilled and tapered all those angle-aluminum braces. Hundreds of builder-hours.

There was, however, a scattering of in-flight failures of amateur-built gyro components, normally happening when the builder departed from the instructions. One such infamous (and deadly) builder error was omitting the radius between the various journal diameters on the rotor head spindle (the original Bensen rotor head used a customer-machined spindle, not a simple AN-8 bolt as in the later offset gimbal head).

The "customer as builder" legal dodge has been fairly effective at shielding kit suppliers from liability. It certainly has not been legally bulletproof, though. I believe that TEAM, among others, lost one of these cases.

If a kit seller talks up his "engineering" qualifications and supplies detailed instructions, and the customer follows them and smokes in, the seller is still at risk.

And the sellers of factory-finished, knocked-down-for-shipment craft probably don't deserve protection under the customer=builder formula. It really is hypocrisy.
C

Doug, your post above brings back memories of my earliest gyro encounters. I remember watching a pioneer SRC member, Dan Waters, (now deceased) come in for a landing. During the flare, the mast broke off at the seat back, destroying the rotor but fortunately, without injuring anyone.

As it turned out, Dan had misdrilled the holes for the top engine mount/seat brace; flipped it 90 degrees and drilled a new set of holes, -A perfect dotted line for mast breakage.

That incident should have been my no-go message but Dan, having a woodworking shop, built my first set of rotor blades in exchange for an offset-gimbal rotorhead. The spindle head was the only one incorporated in the Bensen drawing package, the gimbel head being available only as a Bensen product, but easy to copy.

The set of blades Bob Carbonell and I had held up during our learning to fly sessions but the lower plywood skins began separating after a bit. I then observed the lower plywood skin was glued to the steel spar and nothing else on the leading edge side. I immediately grounded our gyro while I had extrusions made for a copy of Bensen metal blades.

The president of SRC, Dan Manning, had Bensen metal blades, serial number 1 from which I traced the spar. I didn’t know much about rotors at the time or I would have used a more modern airfoil than the 8H12.
D

Chuck, as a teenage gyro builder I bought Ron Menzie's castoff parts as he Brock-i-fied his original, humble kit-built B-8M into a showpiece. I got his spindle head, split-rim steel wheels and gorgeous wood blades (with exposed spar, flathead screws, noseweights, et al).

I may be a minority of one in loving the feel of that old spindle head. I eventually bought a gimbal only because of fears about spindle failure. Ron's workmanship was impeccable (as always). On his spindle, the radii were perfect and totally smooth, but still I worried. The spindle was, after all, not a forging, but just bar stock turned on a lathe. You can picture the "end grain" at the end of each progressively smaller journal.

Anyway, in flight the gimbal control system felt sort of "indirect" compared to the crisp sensation of the spindle.

The last 50 years have brought dramatic changes, Doug. We have swapped manual skills for keyboard skills; no more hot rods, no more home built sail boats or anything that requires holding a wrench or hammer.

Mankind has traded greasy hands and dirty fingernails for pot bellies and broad rear ends. I can live without a hacksaw but not without my computer.
C

Doug, your endorsement of the Bensen spindle head brings to mind comments by Dave Prater (another old timer). Dave and flying buddy Bill Parsons started out together in their home state of Tennessee with early Bensens; Bill got modern and purchased a Bensen gimbal head but Dave remained loyal to his spindle head. Dave commented that when flying in formation with Bill, he (Dave) was all over the sky but Bill was steady as a rock.

Dave said that at first he thought Bill’s steady flight was a result of superior flying skills but after a short flight in Bill’s gyro, realized the difference was the due to the gimbal head.
D

Yes, as a newbie I probably interpreted very light stick feedback pressures as "nice and direct." No comment on stability! What did I know/care about that?

The spindle head has what Craig Wall called "static pseudo-stability," in that the pressures created by blowback cause airspeed to trend ever downward towards zero mph. In my case, using an overhead stick, the weight of the stick, twist throttle and my hand just about cancelled this rotor-aft tendency. A fool's paradise, I guess.

Not that I cared to let go of the stick much.
P

Gyroplane privileges require an add-on category rating, whether under the sport pilot rule or a higher certificate. How long does that take?

Bob Snyder, of AutoGyro USA......“So what I tell everybody is to expect a minimum of 10 hours. There are guys that get it in just a few hours. Most of them are professional pilots,” says. Average? Somewhere between 10 and 15 hours. “I haven’t found anyone that I haven’t been able to teach,” Snyder says.
Click to expand...

Is that a solo/dual mix in that 10hours or would that be all dual training and no solo?

Philbennett said:
Is that a solo/dual mix in that 10hours or would that be all dual training and no solo?
Click to expand...

There is no solo time required for adding Sport Pilot Gyroplane privileges to an FAA pilot certificate.

There is no minimum dual required to add Sport Pilot Gyroplane privileges to an FAA pillot certificate.

As a class add-on to my helicopter rating, I earned my commercial gyro privileges with exactly zero hours of solo time in gyros. I demonstrated proficiency to a Designated Examiner and it was all done.
P

Thanks for the info - it was a lazy post, looking at the FAA documentation there are some surprising items in the practical test and a very wide range of interpretation.

Some of it is just nonsense - I mean what is this supposed to be?

A. TASK: STRAIGHT-AND-LEVEL, TURNS, CLIMBS, AND DESCENTS AT SLOW AIRSPEEDS

Exhibits knowledge of the elements related to flight characteristics and controllability associated with maneuvering during slow airspeed.

Selects a safe altitude no lower than 600 feet AGL.

Never the less I'm going to call Bob Snyder out. I think it is highly unlikely that someone - even who already holds any licence - will be flying to the accuracy required in the practical test within 10hours of training.

Philbennett said:
So I'm supposed to fly the minimum level flight speed (which I guess we can agree a number) but then I'm supposed to climb with that number too?? Err? Why do we think the minimum level flight speed is going to give us the ability to climb?? Then the nonsense continues with maintains +/-100ft...Am I missing something?
Click to expand...

I think you are missing something. I think what it's trying to say is this: establish straight and level flight at a very slow airspeed. Then you are expected to maneuver from there (at the minimum airspeed necessary) staying within 100 ft of whatever altitude the examiner specifies for the maneuver, which will, of course, be different from the starting altitude for climbs and descents.
P

Yeah perhaps, it is very poorly written and because of the wide range of interpretation that must follow one wonders what is being tested.

The section is titled "A. TASK: STRAIGHT-AND-LEVEL, TURNS, CLIMBS, AND DESCENTS AT SLOW AIRSPEEDS". The delta between minimum airspeed required to maintain level flight, descend and climb is huge, especially so depending upon the aircraft and configuration. Beyond which what is the utility of a slow airspeed climb and isn't the risk / reward of its execution for the novice pilot very bad?

Once more gyroplanes suffer at the hands of the lazy.

What are people actually doing when they are briefed on this part of the test? I suspect you guys have actually done it.
Last edited: Jul 10, 2020

What likely will happen, after establishing the straight and level, will be some easy maneuvers at low speed, a "high-speed"/vertical descent followed by a recovery (by properly increasing airspeed), and then probably an ascent to wrap things up. Only at the ascent stage will airspeed need to be significantly increased from the starting speed, and that will conclude the demonstration of slow-airspeed skills. It's pretty much common sense.
I, having had to re-write numerous things produced by the military, can attest to the fact that government writers are unlikely to be masters of prose, or even, at times, clear-headed about what they want to say.
P

Yes and whilst I hear you (and don't necessarily disagree with any of it) the problem is that the headline doesn't fit really with what is described as the climbing and descending part are largely irrelevant to it, especially since the +/-100ft clearly can't include any climbing or descending.