I hate all things UPS including UPS Freight

I was lucky enough today to start a new fight with UPS freight. My last one was beause I shipped a 2180 newly built VW engine to a friend in Texas. I carefully packaged the engine to prevent any damage short of a bulldozer running over it. I put the engine inside 2 vacum sealed bags. Then centered it by hanging from a rope into the center of a crate that gave a full 12 inches clearance to all sides and the top. Then I filled the box with X12 expanding foam. When fully expanded and cured, I cut the rope, trimmed the foam down to allow the top to be put on the crate. Handed it over to UPS Freight in my driveway.....luckly all recorded by my wife, including the crating process.

Well the box disapeared in shipment. 11 days later UPS informed me they found it and delivered it. Then I got the picture and IRATE email showing the engine with every cylinder damage, engine case cracked, wrapped in shrink wrap and cargo strapped to a pallet. Well I send the video and all pictures to UPS, it only took 6 months and filing in small claims court where the judge ordered them to pay.

I contacted UPS Freight, the person seemed nice, it is a change for them however I remembered they were just purchased by a Canadian company from UPS. Anyway I sent him all the pictures of the two crates taken during the loading along with the drivers signature on the pickup document stating both crates were in good shape and meet the dimensions on the BOL. I should say the 100x24x26 and one at 36x25x29.

Well 30 minutes later I get an email from billing stating.... I will copy and paste so it is correct:

Thank you for your email. I have checked on the records and unfortunately, the attachment will still not suffice for the correction request. We will need a full proof of commodity for the item that was shipped. “Proof of commodity” is described as an invoice or packing slip along with a pre-printed spec sheet or catalog page, which lists the commodity description, weight and shipping dimensions. If an invoice and packing slip are not available, then a copy of the spec sheet or catalog page information identifying the freight must correspond to an order/product number, which can also be found on the original bill of lading.

A new bill of lading covering the same shipment or another copy of the original bill of lading with typed or hand-written description, weight, density or class changes will not be accepted as proof.

Once proof of commodity has been received, I will submit a correction request submitted to tour research team. I will wait for your response.

So what the hell does what is in the box have to do with the length the crate is? It did not come from a business, I did not purchase it from a business and there is no spec sheet for aluminum tubing that reference the dimensions that were shipped. 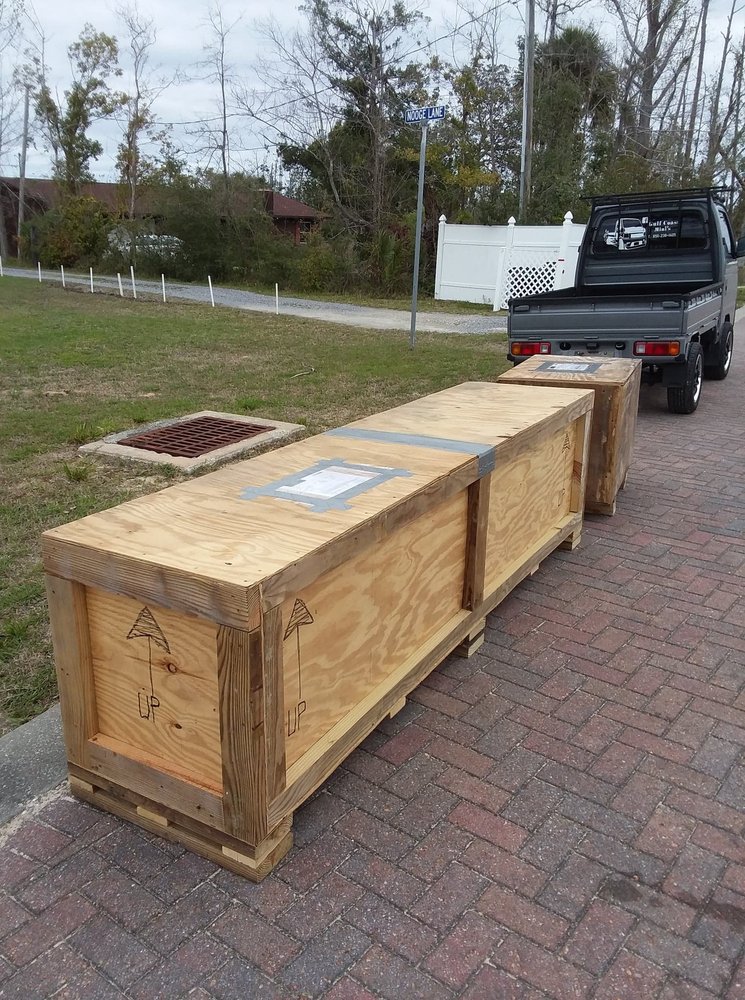 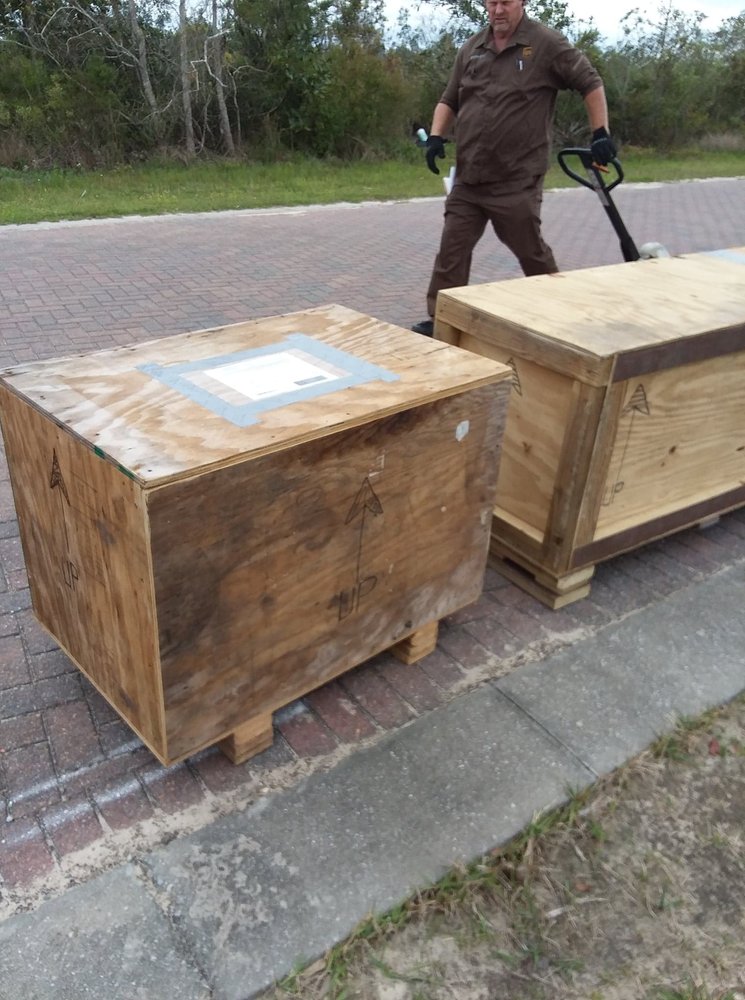 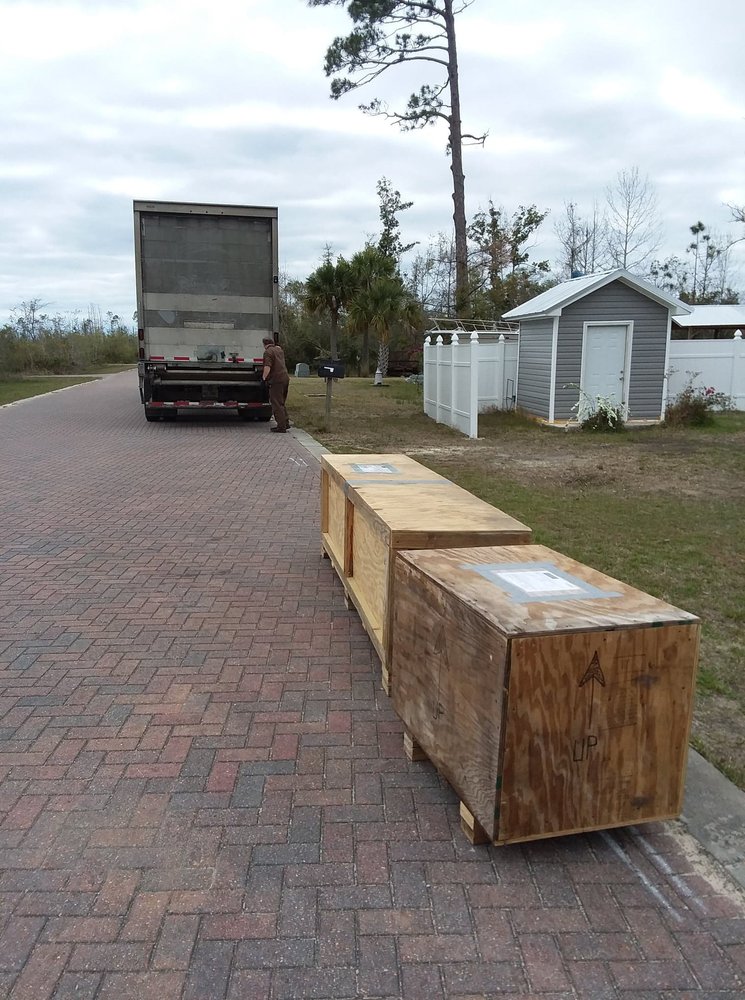 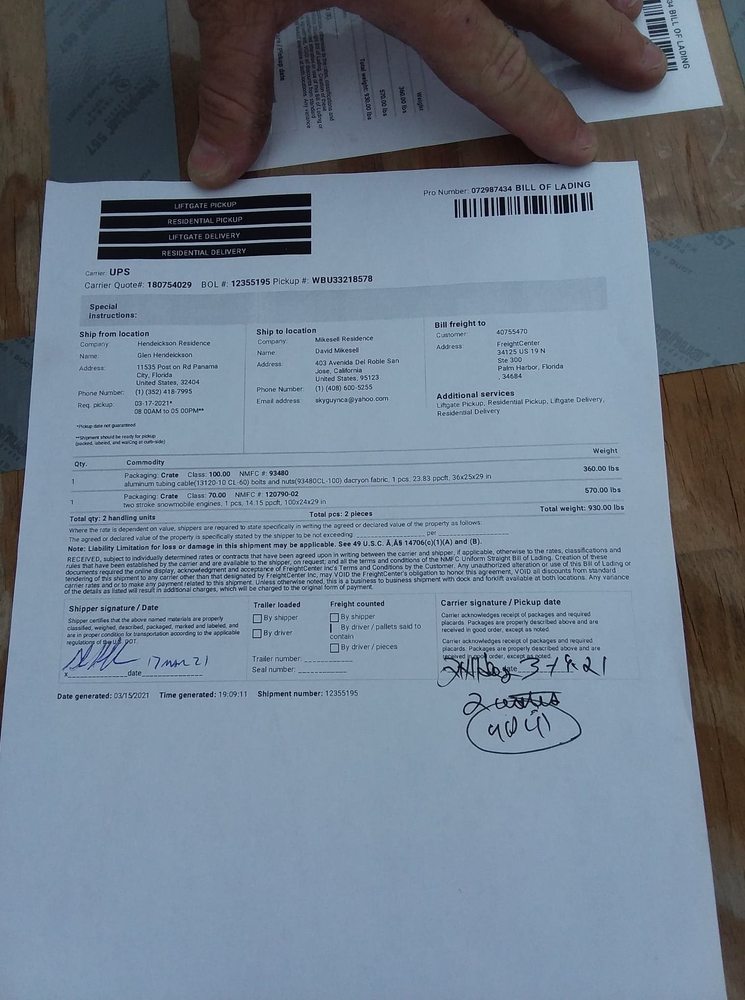 So all this is not enough to prove one box is a whole lot shorter than the longest dimenstion they tried to charge me for?

What is in the box is irrelavent, what they are trying to do is say I violated the agreement by not listing what was in the box correctly, which was aluminum tube, bolts and nuts, dacron fabric and 3 snowmobile engines.

So now back to court again over $350 bucks, I am also demanding a refund because the delivery driver refused to unload my crates, he said i had to do it with no help or he was taking them back and tell dispatch they were undeliverable and then i would have to do to the terminal to pick them up......I have 5 witnesses, 2 are my neighbors who helped unload the 570 lb long crate along with my video security system......yep UPS refused to accept the driver refused to unload my shipment, it is the same driver who said both boxes were 100 inches long.......see a pattern?
A

From my experience with UPS, the way I see it is that they are a disgusting company, but a necessary evil.

DHL is my all time favorite, never a single problem.
FedEx misses delivery dates, but never damaged or lost a shipment

UPS, disgusting company, a shipping service arranged the shipment for me even after I said anyone but UPS, they admitted the fault and apologized, still does not return my money for really terrible service and definitely Interstate Commerce Fraud by changing the dimensions of my crate to a size that never existed and showed intent by refusing to accept the video and pictures of the freight as it was picked up by their driver.

That's terrible service. How on earth did the Vw engine end up like that considering the lengths you went to, to protect it ?

They judge asked UPS rep the same question, he was amazed they would fight the case in court with all the evidence I had submitted, and they just had a rep saying I was lying for their defense.

The major problem with the whole thing is that it took just a bit over 6 months of fighting and 3 postponed hearings by UPS to get my money. Most people give up and let it go. I am very tenacious and never give up. In the end I got full value (I showed the judge the receipts for all the brand new parts that were used in the engine) plus the time I used building the engine at $25 an hr, plus all the time I spent fighting with them and research time for my case at $14 an hr. Well it came up to a lot more than UPS thought it would so they petition the judge to let them order the Insurance company to pay now that they had lost.

The judge actually laughed at them, he read the insurance agreement provided by UPS and it would have paid only 1/3 of what the judge was awarding me. He literally told them to "pound sand" that I was fairly awarded my settlement and that they would pay it.

I further asked the judge to order them to pay within 15 calendar days due to the amount and time it took to get my award, the judge so ordered it.

UPS went off the hook and used a legal challenge and lost the appear 15 minutes after it was filed. In the appeal they are only allowed 1 and nothing new, the different judge reads the statements, court minutes, looks at the evidence presented and the judgement that was already rendered.

I won the appeal too. UPS has gotten way too big. We all see hundreds of videos on YouTube every day of UPS drivers throwing boxes with TVs and sensitive electronics over fences, at porches, kicking boxes they drop..........but they do not even try to change their image or polices. The drives and handlers get away with what ever they want........it is time for them to see some really heavy fines for condoning these actions.

Fair would be for UPS to pay at least $20,000.00 per incident of damaged or last freight no matter what its true value is. They abuse public trust every time they let it happen, they never fire anyone stating union policies and contracts......well time for that and those protections to go away.

They need to pay now, not US any more.

well done for standing your ground and persisting to get justice against a big organisation like that. It was like David and Goliath that win!

I recently bought a large Generac generator for the house. If I needed lift gate service I had to specify and pay an extra delivery fee. I declined and met the driver just off the highway with my tractor with forklift attachment.
At least I was notified at time of order! Sounds like a real friggin goat rope to me!

When UPS was the only game in town, everyone had to buy a ticket.

However with DHL (my favorite, especially after living in Europe and seeing how everything gets everywhere in 24 hours) and Fedex, screw UPS.

skyguynca said:
When UPS was the only game in town, everyone had to buy a ticket.

However with DHL (my favorite, especially after living in Europe and seeing how everything gets everywhere in 24 hours) and Fedex, screw UPS.
Click to expand...

Received my rotorhead from Poland through DHL. Not even a scratch on the crate itself. Their rep was nice too when I had the customs issue. Did not know the history of UPS. They sound like Scientologists

Total Flight Time
Too many to count

I’ve had nothing but trouble with DHL!
Never again!

You’ll find horror stories with every shipper. It’s a crap shoot on who to go with. Covid has really increased the problem. There is such an increase in the number of packages that crap happens.

US Postal Service. Priority Mail. The bane of my existance all the while I owned the prerotator business, 10 years, Misdirected, lost open and empty. The list is quite long. Local service?? The fact that it is government run shone through at every complaint. Any complaint was met with He busy, He come back (never did) Never a "we're sorry' Same from our postmaster. SHAMEFUL performance. I hear UBER Freight is good, but may have to be "full truck load" not "LTL" don't know, they came on the scene too late for me.

I've never had an issue with any carrier, what are you shipping?

I've had great luck with Fastenal. You have to deliver it and pick up at their stations, but the price is right and I've never had a package damaged.
You must log in or register to reply here.

Estate Sale 3 Gyros including a Tango 2

G
Installing the rotor by myself