1/ "The system of yaw control in a differential collective coaxial machine”, and
2/ “yaw control is reversed dureing an auto”​

The subject is a difficult one for even for the experts. Referring to the note in post #155.

~ Kamov is, arguably, the most knowledgeable company on coaxial helicopters.
~ Gareth Padfield is the head of Helicopter Aerodynamics Section at Defense Research Agency in England. His book Helicopter Flight Dynamics: The theory and Application of Flying Qualities and Simulation Modeling is over 500 pages and extremely complex.​


Rotors that do not have the ability to change the pitch of their blades must; vary their RPMs differentially, or put drag tabs on the blades, or place a rudder in the rotors downwash, or have separate small propellers etc.

Chuck mentions in his latest post that “Bensen's yaw control was via a small engine/propeller blowing on a conventional rudder.” In other words, the yaw control on Bensen’s coaxial helicopter has nothing to do with the rotor system. This is basically the same as the two small propellers in Pegg’s PAM-110B, which is linked to in post #157.

It is interesting (for me at least) to see that Pegg's newer 1/5-scale helicopter does not appear to have these small propellers.

For the ‘conventional’ coaxial and intermeshing helicopters, autorotation, is a meaningful concern since they do not use the so-called ‘band-aid’ type of solutions.

Birdy, I think that this will answer your specific question.

Coaxial and Intermeshing helicopter use differential collective (differential torque) for yaw control.
The overrunning clutch is located between the engine and the gearbox.
The gearbox consumes 4% of the engine’s power.
The gearbox is hard coupled to the rotors.

During powered flight;
~ 96% of the power gets to the rotors and the yaw authority is strong.
~ Higher pitch on the CCW rotor will rotated the fuselage CW.

Gearbox drag has nothing to do with it. It is torque differential between rotors.

OK I'm lost!
Going to have to read this a few times and look a few things up.
C

Torque differential between rotors yaws the airframe whether the rotor is driven by the engine or by the airstream.

In autorotation with engine disengaged, the rotor with greater pitch has greater drag than the rotor with lower collective, the torque difference yawing the airframe, exactly the same as engine drive except torques are in reverse direction.

Bear in mind, the rotors are geared together and can’t act independently as would be the case if each had its own freewheel clutch.
Or like Bensen’s torqueless drive, a differential gear between rotors.
C

The Gyrodyne QH-50 had yaw control via rotorblade tip brakes, small vanes at blade tips that would pop out and increase the drag of its rotor.

Yaw control was identical whether the rotor was driven or autorotating. There was no reversal.

This article doesn’t mention tip brakes, a Google search might be in order.
R

The Gyrodyne patent explains yaw control via differential collective better than I can:

The tip-brake (drag) is their way of getting around the inability to use differential collective for yaw during autorotation.
(Reference paragraph #2 in the link on post #167 above.)


The tip-brake is very complex but like you I assume (not having seen an exploded gearbox) that it eliminates the need for left and right pedal reversal during autorotation.

Gearbox drag has nothing to do with it. It is torque differential between rotors.
Back from my boreing drive, and cept for the rum boiln off this morn'n, its sunk in.
I savvy why the reversed peddle response now.
Thanks.
R

You asked a very interesting question in your post #149.

I have participated in perhaps a hundred postings, plus research, related to yaw control in auto-rotation on twin-rotor helicopters.

First the easier of the two.

Gearbox drag has nothing to do with it.
Click to expand...

You may be correct about my speculation on the gearbox drag. - It may depend on the design of the gearing in the box(es)

It is torque differential between rotors.
Click to expand...

It is definitely not torque differential between rotors.

I savvy why the reversed peddle response now.
Click to expand...

Your thinking would be of interest. Sincerely.​
Apparently, pedal reversal on the coaxial is of little to no value in autorotation.

No one, to my knowledge, has given a definitive answer to your question, That is why it is such an interesting one.

A logging pilot up north had to auto in an old husky, He added a little yaw & found it acted in reverse, spun in & rolled down a hill. Walked away, He said the damn peddles worked backwards WTF? Rudders don't do well unless you have forward airspeed.
B

Dave, ina coaxial, under autorotation, with fixed geared rotors, if you slow one,[ add pitch] it slows the other.[ coz they are hard linked]
The difference between the two is the one with extra pitch is be'n slowed by the extra drag. The other is be'n "torqued" slower, [ reversed torque]. This reversed torque is transferred through the pinion, which is hard rigged to the frame.

But, only half of the yawing power of the slowing rotor is transferred to the airfame. The other half it used up to slow the other rotor.
And it don't matter wether you take on degree of pitch off one and add one to the other, its still a 2* differential.

Don't wurry, it still don't sound rite to me either.
I need anatha brain numbn drive to ponder it sum more.
R 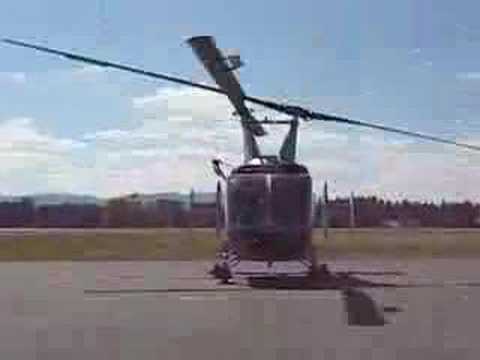 Coaxial:
You, and Chuck, are correct if the gearing is the simple arraignment of 1 pinion driving 2 crown gears. My speculative posting #162 posting was poorly thought out and presented. Sorry.

However, when the cyclic is down, as it is in autorotation, there is a problem with yaw control and differential collective pitch will not solve it.

The problem with the Kamov coaxials has already been discussed.

Here is another interesting report on yaw;
Regarding the Advancing Blade Concept (ABC) High Speed Development ~ May 1980 ~ (#3):
"However, with the rotor flying at close to autorotation at high speed, differential collective pitch has little impact on yawing moment ....."


I will stick with my speculation on #171 for now.

Thanx, that clears it up.

The SKYTRAC in flight!

There seems to be a lot of positive in these systems and there are numerous models but still way in the minority, while they seem to be gaining in popularity I wonder why they really never seem to have been a serious contender over a conventional helicopter.

There seems to be a lot of positive in these systems and there are numerous models but still way in the minority, while they seem to be gaining in popularity I wonder why they really never seem to have been a serious contender over a conventional helicopter.
Click to expand...

FAA certification would be a biggie!

This configuration has been qualified of "communist"!

For the extra set of blades,swashplate etc you could outfit another airframe or build a few batches of tailroter systems, Production costs. another compramize in the grand plan of flight.
You must log in or register to reply here.

A
Coaxials and their workings

The Shepherd (A Christmas Tale)