True the ducted fans are for yaw control as well as forward thrust, but I would not consider them as tail rotors in the conventional sense. In fact the Eurocopter's new X3 is very similar to the AVX except that its propulsors must also counteract the torque of its single rotor.

Heck they both are repeats of the FL-185 by Flettner, who IMHO was the preeminent designer of helicopters.

Poor Anton was on the losing side,Winners get to rewrite history, Its like the wrights 1948 contract with the smithsonium ,For the wright flyer the museum locked out other inventers that flew before them,No good for anyone.Check out the Hiller museum.....

May be there is something there:


Could be related to this thread:

And also this one on the turbine...


hillberg in post #143 said:
Poor Anton was on the losing side, Winners get to rewrite history, Its like the wrights 1948 contract with the smithsonium , For the wright flyer the museum locked out other inventers that flew before them, No good for anyone. Check out the Hiller museum.....
Click to expand...

Prouty deserves admiration for his informative and easily understandable information on Single+Tail rotorcraft. But, his latest article in the January/February 2013 issue of Vertiflite is entitled 'A New Concept?'.
It is about the Eurocopter X3.

He gives credit to the Fairey rotorcraft. 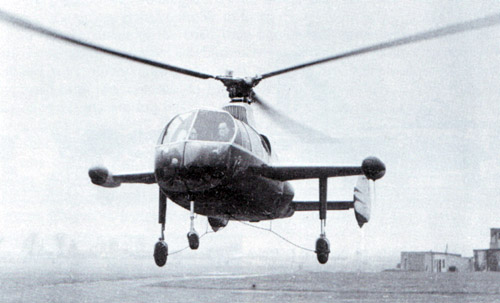 But there is no mention of Anton Flettner's FL-185; which is shown on Post #142 in this thread.

Advancement is difficult when so called developers don't look outside the box.

Flettner's plant was bombed and had to be relocated on three occasions during the 2nd World War.

Paul Cornu, who is credited as building the first helicopter, had his house bombed in the 2nd World War. Most of his material was destroyed, and he was killed.
Last edited: Feb 14, 2013

A proof of concept:

Info on the Turbine:

need to duct the inlet for ram air recovery.
B

Interestn thread.
And alot of information.
I hava question, of which the answer is probably in this thread sumwhere, but iv missed it.
The systm of yaw control in a differential collective coaxial machine is, i think, the most efficiant. But as has been said a few times, the effectiveness of this systm depends on the amount of collective pitch at the time.
Full power collective pitch would give the strongest yaw control while nearing free wheeling collective pitch would give minimal control.
My question is bout the reports that yaw control is reversed dureing an auto.
How could this be?
I would have expected nill yaw control, not reversed control.
If you are useing a slightly vairied load between the rotors to control yaw, then its the draggyest rotor the machine will rotate against.
But in an auto, when there is no torque supplied to the rotor from the machine, [ its freewheeln] how could vairied rotor drag have any influence over the frame??
C

birdy said:
I would have expected nill yaw control, not reversed control.If you are useing a slightly vairied load between the rotors to control yaw, then its the draggyest rotor the machine will rotate against.
But in an auto, when there is no torque supplied to the rotor from the machine, [ its freewheeln] how could vairied rotor drag have any influence over the frame??
Click to expand...

I usually don’t pay much attention to fantasy threads like this one but stumbled across Birdy’s comment.

It would be true if both rotors were independently freewheeling that there would be no yaw control but the gearbox with reversing gears is attached to the airframe.

When one rotor is supplying torque to the other, there is a reaction at the gearbox that tends to yaw the airframe.

Dick DeGraw’s synchopter had yaw pedal reversing built into the collective mechanism.
B

When one rotor is supplying torque to the other, there is a reaction at the gearbox that tends to yaw the airframe.
How??
If you load one rotor with extra pitch, the drag is transferd, through the box, to the other rotor, not the machine.
Or am i getn the gear box setup assabout?
Im assuming that wen you load one rotor, it slows, and the other speeds up, as ina differential connection. Or are they hard geared to each other?
Either way, theres still no hard torque connection to the airframe, coz its free wheeln.
C

Imagine, Birdy, that you’re standing on the ground, supplying torque to one shaft.

Don’t you think the synchopter would yaw in the direction you’re twisting the shaft?

That would not be the case if you were standing of the airframe while twisting the shaft. But when one rotor supplies excess torque, it comes from the outside world.

Imagine, Birdy, that you’re standing on the ground, supplying torque to one shaft.

Don’t you think the synchopter would yaw in the direction you’re twisting the shaft?
Yes, of course.

Im speakn only in autorotation.

If you had a twin rotor gyro, with the blades hard linked to spin in opposite directions, thered be no torque transferred to the frame if you pitched differentialy.
A coaxial, or even regular heli is the same thing.
C

OK Birdy, the torque is actually reacted out in the gearbox, which if not solidly bolted to the airframe, would rotate. That would be messy in a synchopter.

It may be simpler to consider a coax with gearing consisting of a pair of crown wheels and a pinion.

The pinion runs in bearings that are part of the gearbox case.

Suppose that instead of the gearbox being bolted to the airframe, it was in bearings and free to rotate. Rotate it would if torques from the pair of rotors did not exactly balance each other.

The yawing motion resulting from one rotor producing more torque than the other reacts against the airframe via the gearbox.

Birdy you ask a good question.

The coaxial has excellent yaw control, which is done by varying the lift, and more importantly the drag, between the two counter-rotating rotors, while maintaining a constant total lift.

During autorotation, the airflow through much of the disks is reversed. A particular pedal input would now cause a yaw in the opposite direction, if it were not for 'pedal switching linkages' that automatically takes place in Kamov's at the onset of autorotation.

"The problem of coaxial-rotor helicopters' directional stability in autorotation has been solved in full." ~ Quote from Kamov web page, but they do not say how it has been solved.

CRAN said ~ "Dr. Gareth Padfield picked the Russian engineers up on this point [weak yaw control during autorotation] at the conference and they sheepishly said that ...'yes, it is a problem, and we achieve direction control in autorotation with the moveable fins...' or words to that effect."


A related question that was asked on PPRuNe many years ago was; What happens on an autorotative landing when the collected is raised to help in the flare.
I don't think that there was a definitive answer.

CB, mate, either im still thick asa brick, or your not getn me argument.
Yes, all youv said is correct, but only under power.
Dissconnect that pinion from the craft [ as ina sprag dureing an auto] and any drag/torque from one shaft is simply transferred to the other, through the pinion gear. Theres nuthn on the end of the pinion shaft to restrict any rotation, only the other crown wheel.

Under power, wen the sprag is closed, and one shaft is tryn to slow [ coz sumone has increased its pitch], the torque is taken up through the pinion gear, into the frame, creating the desired yaw.

A particular pedal input would now cause a yaw in the opposite direction, if it were not for 'pedal switching linkages' that automatically takes place in Kamov's at the onset of autorotation.
Yes Dave, I read that, but it only said it happened, not why.
I cant see how any torque can be transferred to a aircraft from a free wheeln rotor.


Hang on, I think a penny dropped.
R

If the penny is still rolling around this might be of interest. OTHER: Miscellaneous - Thoughtless Idea - Coaxial Transmission w/ Yaw Control

Many years ago Bob Pegg had asked if he could use this idea in his PAM-100B.

I've no idea whether he used it or not, but a search just now brought this video up.

Birdy, your imagination has to be coaxed.

I’ve added a gear case. Suppose the gearcase was mounted in bearings and free to rotate.

No torque could ever be transmitted to the airframe.

Imagine the pinion was driven by an electric motor, bolted to the gearcase and also free to rotate with it.

We would have a torqueless drive; even while the rotors were being driven, no torque would be exerted against the airframe.
If one rotor had more collective than the other, it would run slower than the other and the gearcase would spin at the speed difference.

Ill be driven most of tmorrow, so ill have plenty of time to get the grey cells into gear.
C

Here’s a schematic of Bensen’s torqueless drive for a coax helicopter.

It’s not intended to be a practical drive, the “V’ belt drive is only for illustration.

Keep in mind that yawing motion of the airframe can only be accomplished by a connection with the outside world. No arrangement of gears and levers can yaw the airframe without that connection.

Bensen’s yaw control was via a small engine/propeller blowing on a conventional rudder.