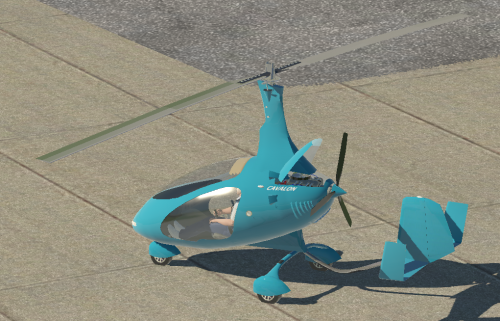 It was love at first sight. When I first saw the Cavalon side-by-side gyro made by AutoGyro in Germany I was struck by its elegant design. My congratulations to the AutoGyro team …what a beautiful aircraft you have created! Unfortunately, the $125,000+ price tag was a little pricy for me so I dec...

Got the tip from a fixed wing pilot which uses a similar setup to train for his ppl, unfamiliar airports/routes and keeping up routine.

Any thoughts or experience with such a setup?
J

I built one a few years ago. I like the Cricket, MT-03, and ELA-07 . I lengthened my stick to have a more realistic movement. It required that I play around with the control parameters to get the feel better. I've used the HDMI output and a big screen TV, but a friend of mine has it with VR goggles and he swears by them although I haven't tried that yet.
E

I used one on a very early version of x-plane. It was a good basic model and I found it very helpful in exploring the behaviour of the machine at various speeds, including behind the curve flying.
Later versions of X-plane had much sexier looking models, but they varied from useless to downright awful.
The problem, IMO ,was that X-Plane upgraded about once a year, and the models would not run on later levels, so why would anyone invest the time and effort to create a really accurate model . After a while I gave up on looking.
It is quite possible that someone has put a good one up recently, so might be worth a look. Remember, the graphics can be really good, but the flight characteristics totally unrepresentative. The fidelity of the flight characteristics should be the only thing that matters.
T

I am currently building a complete VR helicopter set up that I will get FAA certified. Some of the aerodynamics in the current xplane Gyros are not accurate but they should be fixable.
You must log in or register to reply here.
Share:
Facebook Twitter Reddit Pinterest Tumblr WhatsApp Email Link
Top