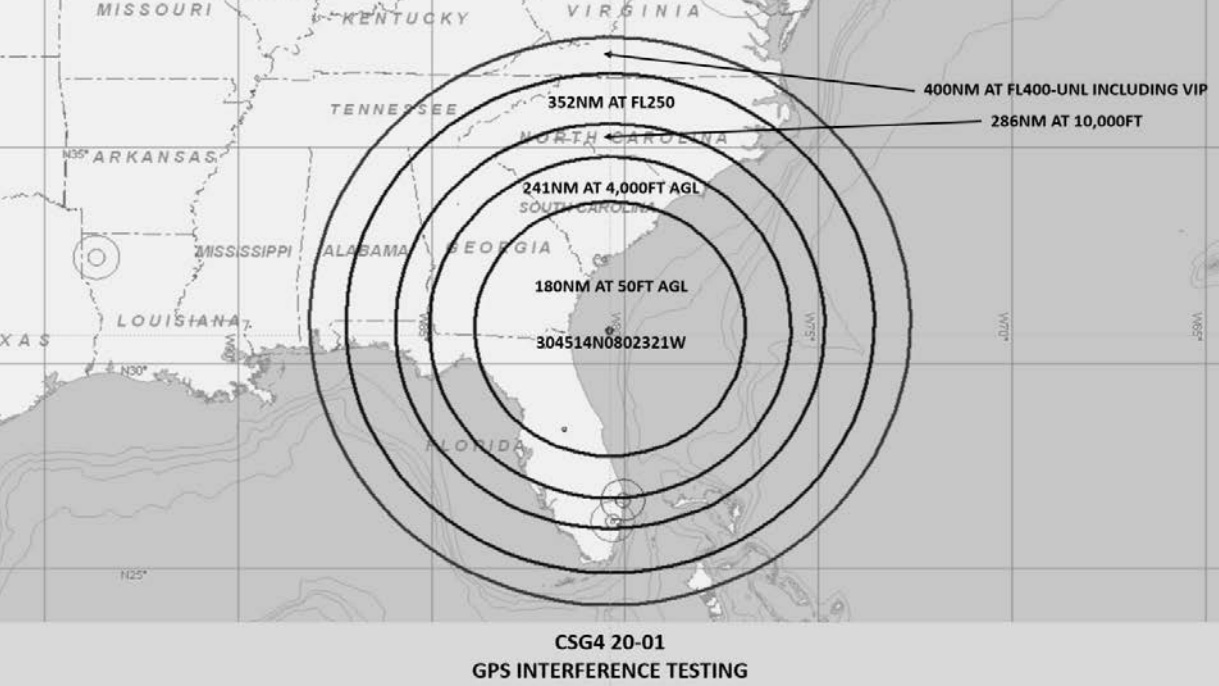 GPS reception may be unavailable or unreliable over a large portion of the southeastern states and the Caribbean during offshore military exercises scheduled between January 16 and 24.
www.aopa.org

I just ran across this today. It is for military exercises offshore and looks like it may affect a significant portion of the Southeast United States.

Looks like people will have to learn to use paper charts and pilotage.

In the south west we often have GPS interference and there is a notice to airmen about it.
R

Remember doing a ferry flight from Jeddah to New York with a Citation V with my eldest boy as my copilot. We stopped in Zurich to pick up all our paperwork and final buy inspection by the buyer. Then he and his son would then fly with us to his base in NY.

We had as our primary Nav system the Global Wulfsberg GNS-X FMS. This used VOR DME and Loran C to establish position. Loran C stations are under the US Navy and as such can be switched on and off or moved at their discretion. That is all very well if you remain in VOR/DME range and the system can compare and triangulate without Loran...but as you start crossing oceans Loran C becomes much more important.

On the leg from Keflavic to Sonderstrom I gave the first reporting point only to be told that I was not identified as being at that point. As I had a hand held Garmin GPS backup in the briefcase this was duly brought out and confirmed what Keflavic radar had said. The GNS-X had worked flawlessly for the previous 5 years, so I was now facing a slight problem. I did however have some information that helped decide which was correct. The Garmin position had corresponded with the Radar reported position, in addition the GNS-X was giving us a ground speed in excess of our TAS...but we were flying into a known headwind and as we climbed higher into the jetstream coming across from the US, which the Garmin confirmed.

Over cloud and later a very chilly looking N Atlantic, the GNS-X told us it was TOD and time to descend to Sonderstrom, Garmin however said that point still lay ahead. To a certain amount of relief from me it was correct. On the second leg once again in VOR range the GNS-X was in agreement with the Garmin...for a while. As we approached Canada and Sept Isle again the began to converge. Once in NY i was on the phone to Global. The answer was the USN had shut down a station and then moved it a few thousand miles to another location, which was kind of skewing the position results. Thank the Lord that the GPS was not being jammed as well.

Nearly twenty years ago, when they were still filling out the satellite constellation, I had a Sony Pyxis handheld GPS receiver tell me that I was crossing west Texas at 450 knots backwards in my McCulloch J-2. Must have been a wicked headwind!


P.S. I used Loran problems in one of my prior lives teaching math, asking the students to find intersecting hyperbolas from station time differentials to get a position. Not so interesting in modern GPS days but had some pertinence then.
Last edited: Jan 17, 2020

I use only an old (but simple and reliable) Magellan 320, but I've been told that many modern GPSs do use also the Russian Glonass system. Hence, and for those who use modern GPSs, the interruption of the American service would cause no problem at all...
You must log in or register to reply here.
Share:
Facebook Twitter Reddit Pinterest Tumblr WhatsApp Email Link
Top