Effect of prerotation on takeoff distance

The other day was one of those rare days when winds were light (i.e., below 5 kts) over here. These days are few and far between, and so I decided to seize the opportunity and do some flight testing regarding takeoff distance. I wanted to know how the takeoff distance varies with the rpm I prerotate the rotor to.

The rather surprising result is shown below. Note that the takeoff distance is measured from the start of the takeoff roll to the point where I clear an imaginary 50 ft obstacle. 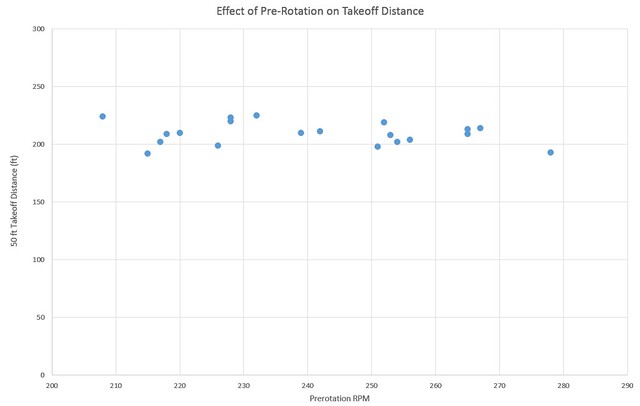 What is surprising is that takeoff distance does not seem to depend at prerotation rrpm at all -- over the range between 200 and 300 rrpm. Why? Well, apparently accelerating the gyro to takeoff speed happens at a slower time scale than the acceleration of the rotor, at least over the investigated range of rotor rpm.

What do others think about this?

That has been my observation too Chris although on a much lower level.

Because I fly out of the same airport most of the time I know about where Puff is going to waddle into the air.

I have experimented with pre-rotating from 160 rotor rpm to 220 rotor rpm and I have not seen a measurable difference in lift off distance.

It seems that once the rotor gets a bite it limits my acceleration.

Hi Chris. why to 50' clearance instead of lift off ? I to wonder if the weight of the rotors would make a difference ( extruded compered to composite).
Mark

Personal opinion:
This is another great thread worth saving the link too!

@flyguy 50' clearance is a distance found in most operating limitations for certified aircraft. Often depicted as a tree at the end of your imaginary runway during training.
P

Too Short a Member

Confirms my observations as well.
Thanks, Chris.
C

I would have lost a bet on that before I did the test flights. I would have argued that it takes distance to speed up the rotor to flying speed and that the higher you start off the less distance you need. I would also have said that there probably is a point of diminishing returns simply because in the time between releasing the prerotator until reaching a speed at which the rotor starts gaining speed again the rotor actually loses speed.

Next, I tried to focus of my analysis on what I assumed was the primary effect of the rotor on the overall takeoff distance: the ground roll. What I looked at was the speed gain of the rotor from releasing the prerotator to the speed the rotor had at the point of lift off. Here is what I found: 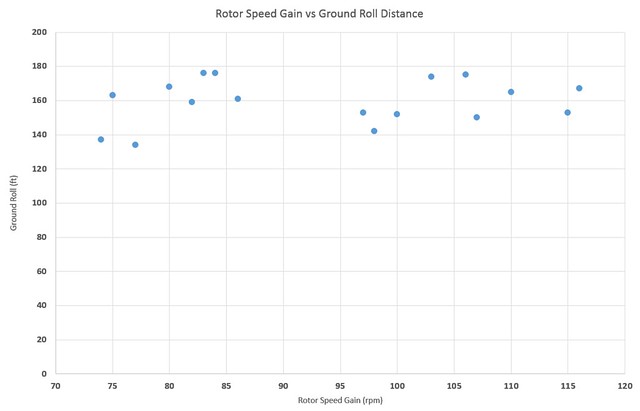 Apparently the ground roll distance is independent of the gain in rotor speed!

Apart from any headwind or tailwind component, the biggest influence on the takeoff distance seems to be the rotation speed. 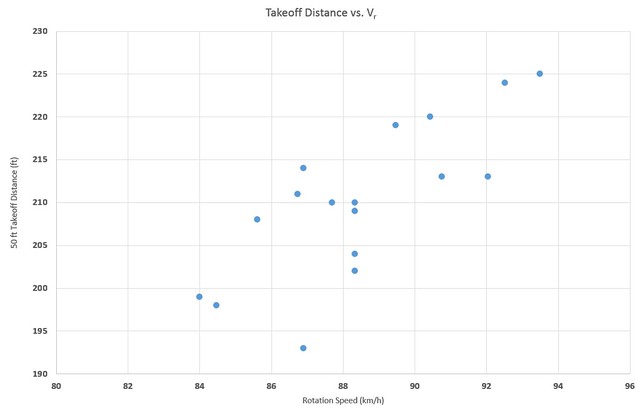 Interesting, but not at all supprising.
Good to see sumone actualy put the time in to prove the point, that its nuthn more than a sales pitch to say your prespinner can get to near flyn rpm.
Coz youv just proved wot iv been sayn for years.
A powerfull prespinner is usless if it cant stay engauged through the roll.
Not only do they slow down between release and getn its first gob full of air, your also tryn to rocket to lift off AS with the disc held full back.

But, this is wot generaly happens wen a non user is the designer/ builder.;(

Total Flight Time
More than 20 less than a million.

I watched Ernie Boyette lift one off in less than the width of runway 36 in Aiken.
The prerotator helped I believe.

My opinion:
Hi Chris
That is exactly what I assumed!

Apparently the ground roll distance is independent of the gain in rotor speed!

Apart from any headwind or tailwind component, the biggest influence on the takeoff distance seems to be the rotation speed.
Click to expand...

It's starting to sound more like a FW take-off as far as ground roll no matter the starting RRPM? That is not intuitive at all.

This is really exciting to learn. Means we can make a light weight electric per-rototator like Nicolas has work on the larger models??
Right?

Personal Question:
Why it doesn't make since. You can do a junk take-off with enough RRPM!
Oh wait you have to have cyclic. Turning the blades flat! Never mind!!

Did you use the MGL for plotting this?

I'd like to do the same test as soon as we can.
L

An interesting test would be to incrementally lower the pre rotation speed below 200 to see if there is a minimum speed that is needed below which it will extend the run. I suspect that this minimum speed would vary based on blade weight.
I am wondering if this will vary for different gyros. I only pre rotate to 160 before pulling the stick back and accelerating, but have been under the impression that on short / soft/ or rough field takeoffs higher pre rotation is necessary
Last edited: Dec 21, 2014
B

Total Flight Time
cant remember, didnt have log books before, but since over 3000

Exactely as Birdy said i too plead with people not to wring the neck out of the prerotator, as it does bugger all above 200, so i only prerotate to about 180-200 and im off as quick or quicker than most.

Personal Opinion and one I'd like to be PRA's:

Well I just learn something Mark!!!

I do love that about this site an you people.

Even though Nicolas sells one if he doesn't mind! I'm going to suggest that PRA start an open source project for a state-of-the-art pre-rotator now that I know we can do this with technology we have today.

We only have to create a power-supply and one program on a mpu.
We adjust the power automatically sensing the amps drawn of course like all the rest but we add watching the Rotor RPM stepping up voltage only as RPM increases enough to handle it.

That way no matter what atmosphere/ wind does to slow it down the program will just step back down to the next power setting that it should be on at that RRPM!

That the entire flow chart of the main parts as an outline.

Then it is just a matter of the Bendix and attaching points needed and done!
Last edited: Dec 21, 2014

This is like having your one research and development department for FREE!

Chris you are another one of my HEROES!!! Thank you!
R

Takeoff rolls are in a fairly narrow band. Question: Does the RRPM have an effect on the time it takes to get to flight speed? The takeoff distance seems to be pretty consistent but have you timed the takeoff roll?

REDHORSE556CES said:
Takeoff rolls are in a fairly narrow band. Question: Does the RRPM have an effect on the time it takes to get to flight speed? The takeoff distance seems to be pretty consistent but have you timed the takeoff roll?
Click to expand...

I thought of that 1st.
Then I realized if I have no obstruction in front of me it really doesn't matter as much as when I had to clear an obstacle.

I want to test both but the data would suggest that is it should be about the same for both. Anyway that is my guess. Cannot wait to learn the real anwser from Chris!

Really just testing anwser to see it I get this stuff or not.
P

So...the 300 RPM prerotator plays no sugnificant role in the 100' take-offs demonstrated by the Sport Copter M912?

Chris,is it possible there's a "knee" in the curve as prerotator RPM approaches flight RPM?

Good question Paul that would explain some of my observation of Tim V flying his butterfly taking off in like 10 feet.

Why I believe this is we use Vx immediately after takeoff to clear obstacles, followed by Vy to reach our cruising altitude quickly, right?
You must log in or register to reply here.

Some thoughts on cross wind takeoffs.
2 3 4

Learning from an NTSB final report.
2

Riding on the train they call the Surfliner!
2 3