On the AERO fair in Germany I detected an innovation from Britain: A weight shift controlled gyroplane. Never seen before.

strictly speaking this is not a weight shift control. It is still controlling the angle of the rotorhead, which does a cyclic AoA change of the blades. However, it reverses controls, like the original Benson did, so it feels like weight-shift.

Andy used the P&M QuikR trike as the chassis basis for this Gyroplane.

Yep,just a modern version of the original Benson Gyro with overhead controls.

Anyone see a appendage? I did not.

Cierva C-30s had a hanging, overhead stick with reversing mechanism at the rotorhead so that control motion was conventional.

Frank there is a really small rudder,its red/white but no H stab.

I think whomever created this deserves some credit, for they have gone beyond what past known attempts at doing this conversion have.

Some Aussies have converted trikes into gyros. Gykes, IIRC, they call them. I do like how this trike-style control arm attaches to both sides of the control bar, behind the rotorhead, and how they incorporated small control arms towards the front of the rotorhead (possibly a form of trim adjustment?).

I can see how this form of gyro would be easy for trike flyers to transition to gyroplane flying. I also like the handle positions jutting up from the cross bar. Looks to be about 60 degrees angle off that bar to be ergonomic for either hand.

Also appears it does have a horizontal stab, as a portion of each main wheel fairing. Might be enough surface area when one considers both. The rudder does looks to be too small for much authority in light of all the body mass in front of it. This could also be a lack of familiarity of these guys coming from the trike arena of aviation, where they have no need for tail feathers. And, their vertical stab incorporated into the mast fairing above the engine might provide additional steadiness in yaw in addition to the wheel vertical fairings, something common on some trikes.

Also appears to have a BMW motorcycle engine for power. I wonder if they have solved the over-heating issues I'd read about years back where the BMW engine mounted behind a gyro or trike was fine for single pilots, but overheats when asked to haul double the payload, because of lack of sufficient cooling airflow over the engine head fins.

It would be interesting to see some video of it in flight.

Anyone know what the red handle lever is up higher on the left control arm? Maybe a cable running up to a rotor brake...?

I have wondered often if a dual function flying machine would be possible. Not like a flying car, where experts claim isn't very good at being either a ground as well as an air transport vehicle.

With an already-built-light airframe, one could only have to basically pay for one type of flying machine, and with a little bit of extra items, enjoy two different types of aviating.

Only need to purchase one engine, one prop, one airframe, one fuselage, one fuel tank & associated fuel plumbing, one control system, one tail, and one set of wheels, tires, and brakes.

Fly it as a trike, with the triangular wing. Leave the tail feathers on. Enjoy long flights in calm conditions, with the great advantage of approximately twice the fuel efficiency that trike and airplane wings provides compared to the draggy rotorblade systems, but having to be well aware of the stall speed of that wing, and stay above that airspeed at all times. Besides respecting the stall speeds of the wing, there is the sacrifice of slightly faster takeoff and much faster landing speeds of a fixed wing compared to a rotorcraft.

Conversely, when the winds kick up to be too much for comfortable, enjoyable trike flying (who reportedly get knocked around in the sky in gusty conditions, which require lots of arm strength to remain in control of the cross bar control system), remove the attachment holding the wing to the mast (above the rotorhead, which is always in it's place) and mount the rotorblades.

Go fly when it's either a steady wind, or gusty conditions, where the rotorblades slice through much of the turbulence at around 300+ mph out at their tips. In rotorcraft mode, enjoy flight worry-free of stalling the rotors, play in the winds as gyros can.

Come to a stop in the air, reverse direction, fly sideways, or even fly backwards, descend vertically (things that usually unnerves fixed wings pilots the first time they experience this form of rotorcraft flight). Have complete control to bank, turn, or flit about like a butterfly does.

Forget about being concerned about stalling the wing. They continue to self-rotate (autorotation). No need to attempt to control their rpms, such as helicopter pilots need to be concerned about. Land at very slow ground speeds (10-20 mph, less if there's a slight breeze). Roll out is usually from 0-20 feet. When the winds are 25+, vertical take offs and landings are easy. The price for all this superb maneuverability and freedom from worries about stalls is fuel consumption about double the rate a fixed wing obtains.

Have two flying machines in one, without the expense and storage space requirements of having two aircraft. Kind of a Sport Utility Vehicle of the sky. SUVs on the ground enable the driver to enjoy pavement driving with added traction of 4WD in snow and wet streets, as well as off-road capability in most conditions.

eddie;n1132795 said:
Frank there is a really small rudder,its red/white but no H stab.
Click to expand...

The designer of the autogire DRAGON is the one who built the BULLDOG autogire.
He installs the same electric prerotator for his DRAGON.
the maximum rotational speed of the rotor is 300 rpm
https://chimera-aviation.com/
https://www.flyer.co.uk/bulldog-inspires-autogyro-trike-from-chimera-aviation/
https://www.aerosociety.com/media/6072/5-barry-jones.pdf 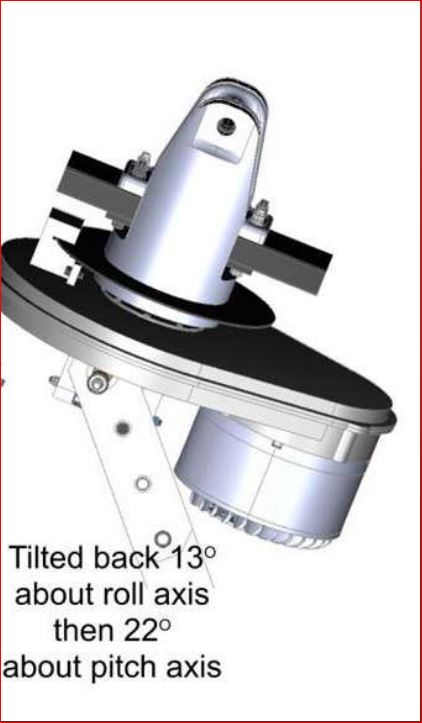 Has it ever flown ?

Kevin the fairings on the mains are located near the CG and will not have any effect as an H-stab,that puppy will tip over as easy

as a drunken sailor

You probably hit the nail exactly on the head, Eddie!

Kevin_Richey;n1132804 said:
I have wondered often if a dual function flying machine would be possible. Not like a flying car, where experts claim isn't very good at being either a ground as well as an air transport vehicle.

With an already-built-light airframe, one could only have to basically pay for one type of flying machine, and with a little bit of extra items, enjoy two different types of aviating.

Only need to purchase one engine, one prop, one airframe, one fuselage, one fuel tank & associated fuel plumbing, one control system, one tail, and one set of wheels, tires, and brakes.
Click to expand...

If you haven't already done so, fly the 120 air miles down to Prineville and visit the Samson Switchblade. Dual purpose!

I have thought the Switchblade wasn't going to be successful since they first started crowing about it. Too heavy for it's wings. I will be surprised if it does what they claim...

I agree it will have high wing loading. I will take higher take-off and landing speeds for the versatility.