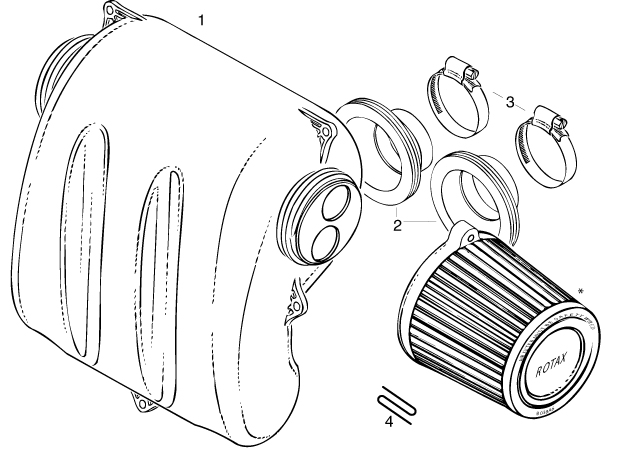 Have been trying to get a straight answer from California Power Systems but days later and 2 phone calls are proving frustrating. Apparently there are 2 types for my dual-carb 503, labeled 1a and 1b on their page linked above, and has to do with which way the filter is facing. Rotax manual page 17-2 says the filter points AWAY from the propeller. Being a pusher gyro, I need one that faces forward. But the photos/drawings on their site don't show this distinction and I don't want to order the wrong item.

Does anyone here have any experience ordering these or can decipher the catalog number? I would be very grateful for any help.

I'm also told by CPS these are new in the box, yet their site shows "No Stock." I'm more confused than when I started this search. Thank you kindly.

Lockwood Aviation Supply provides parts and service for all Rotax Powered Aircraft. We carry over 8,000 unique parts and supplies for Rotax engines and the aircraft they power.

Found this, new and in stock, at Lockwood Aero. I just bought it, being delivered in a few days. Still interested in others' experiences with intake silencers in general. I know they rob a little HP but am hoping that is offset by the higher efficiency of the Prince Prop.

Pairing the Prince prop and the silencer, I anticipate this ship will be noticeably quiet, at least in the offending upper-mid frequency ranges. Having heard a Prince prop years ago sold me right then and there. The noise difference was startling.
W

How many blades on your prince prop Brian?

wolfy said:
How many blades on your prince prop Brian?

Two blades. 60" carbon fiber P-Tip w/leading edge strips. Haven't ordered it yet but got quote from Prince Aircraft. Going to have to be extra-nice to my wife.
W

Be good to hear your thought's once you have tried it.

wolfy said:
Be good to hear your thought's once you have tried it.

Absolutely. If there's something I should be aware of please let me know, Wolfy. The GyroBee specs call for a 60" 2-blade prop. I have never piloted a gyro before so won't have anything to compare it to besides the training craft, which won't be apples-to-apples. However Robert Lutz (my hopefully future trainer) is considering test-flying my ship, assuming it passes critical inspection, documentation, build logs, etc. He would be more qualified to offer an objective appraisal on the flight characteristics. Still a ways to go before she's finished but progress is accelerating.
D

Brian: The Rotax intake does "honk" a bit without the silencer.

My own experience with making 103 weight on a Gyrobee is that you scrape to save every ounce. My 'Bee is a stripped version, and makes it by 3-4 lb. Creature comforts are few: 447 engine, plastic wheels, plywood scrub brake, hollow nosewheel "block," Tiny Tach, Hall Bros. plastic ASI, lightened rudder pedals with no nosewheel link, wood prop, and -- horrors -- an overhead stick with twist-grip throttle. Needless to say, my arm is my prerotator.

Doug Riley said:
Brian: The Rotax intake does "honk" a bit without the silencer.

My own experience with making 103 weight on a Gyrobee is that you scrape to save every ounce. My 'Bee is a stripped version, and makes it by 3-4 lb. Creature comforts are few: 447 engine, plastic wheels, plywood scrub brake, hollow nosewheel "block," Tiny Tach, Hall Bros. plastic ASI, lightened rudder pedals with no nosewheel link, wood prop, and -- horrors -- an overhead stick with twist-grip throttle. Needless to say, my arm is my prerotator.
Click to expand...

No, I'm planning to register it. The 503 guaranteed it wouldn't be an UL. I also added a tailboom diagonal brace per our conversation some time back, and the composite rotor is heavier than others. I did go with plastic wheels and an overhead stick (with reverser). No nosewheel steering link or brakes on the mains, so the added weights are mostly above the CG. Also raised the seat (seat tank) and calculate the ship will be CLT or ever so slightly LTL for my modest pilot weight.

By the way, your forum posts and experienced recommendations have been extremely influential in this build. I hope to show it to you in person someday.

O.H. stick with reverser -- now that'll start a bar fight among gyronauts any time. Even Cierva used overhead sticks -- but he caught some flak for it.

O.H. stick with reverser -- now that'll start a bar fight among gyronauts any time. Even Cierva used overhead sticks -- but he caught some flak for it.
Click to expand...

Well that just made my day, Doug. Thank you. I'm willing to trailer it to Vermont when complete but if you're in North Jersey anytime let me know. Would love to finally meet you and treat you to a great meal.

I know there's been much debate about overhead sticks but I love simplicity. Granted the reverser adds some complexity, but tracing the swing arcs for such a tall mast would require longer arms than mine. The reverser, like a fulcrum, will let me design in a more comfortable control ratio while mimicking the input directions of a standard stick. My fear as a new pilot was training and developing muscle memory on one control system and then remembering to mirror the input directions on another.

Brian, this has nothing to do with intake silencers, but on the O.H. stick:

The control arc with a direct OH stick and the tall Gyrobee mast is indeed too long. On mine, the total throw is almost 2 feet, requiring that I lean forward a little in the seat to get the disk all the way back. I'm 6 ft. tall with ape arms, but it's still a stretch. So gearing it up a bit is not a bad idea.

As for which way it should move: I am stuck on the notion of a control circle. The OH stick is a radius at the bottom of the circle, while a joystick is a radius at the top. For either kind, you move the stick handle along an arc of the circle, either clockwise or counter-clockwise, same as a steering wheel. The gyro's mast follows. I would no doubt splatter an OH stick gyro with a reverser.

Obviously, this mental model doesn't click for everyone. For one thing, the notion of "clockwise" is obsolescent. I tried teaching a 10-year-old sailing student by suggesting he turn the boat "clockwise" (this to avoid confusion when steering with a tiller). He had no idea what that meant. As a digital native, he'd never thought about the hands moving around a clock face.

Such illustrious gyro pilots as Chuck Beaty and Ralph Taggart have reported trouble with the "backwards" sense of the direct O.H. stick. And dual powered training with it is just about impossible to obtain. So reversal may be the real-world answer. I'd use a vertical handle, not a "T," to more closely mimic the joystick that will be on your trainer.

The clan has family gatherings in "Joizey" once or twice a year. Will try for a visit then.

I have followed your recommendations closely, be they to me or from years-old posts to others. I remember you discussing the issues with the control circle radius which started me down this design path. The reverser appears to solve this by the location of the fulcrum pivot relative to the handle and the pitch block.

Though I lack credibility as a newbie, I completely share your thoughts about avoiding a 'T' handle with the reverser. There was a forum discussion about this a few years ago that I read in the archives. (Yes, I spend way too much time on here.) The control stick is carbon fiber over aluminum tube, with an airfoil cross section. It's slightly swept like an upside-down Nike logo but not as curved. It connects to a vertical handle. The spherical path of the handle won't mimic a conventional stick because it's concave instead of convex, due to the pivot being above. But at least the input direction, hand position and tactile feedback will be consistent with those of standard controls.

Wow, I just realized how off-topic this has gone, but this is why those passionate about this sport read every thread. And I would be very honored to meet you when you find yourself this way. Hoping to have the assembled bird ready to show late summer, but I will make time when your schedule permits. You've been more influential in this build than you know, so having your eyes on it for critique would be an absolute treat. And the food will be great.
R

You can have this one for $28 plus shipping. I was going to use it on a 503-powered Dominator 20 years ago. It has been sitting for a while, so it just needs to be cleaned up. You can get the small parts to go along with it from various sources. The flying gyro pic shows the gyro with me at ROC in 2004 I think. The gyro is not included in the deal.

Thank you so much, Bob. I would take you up on your offer if I hadn't already bought one from Lockwood Aviation. Much appreciated though and I thank you kindly.
You must log in or register to reply here.

Do Exhaust Filters for 2-Strokes Exist?